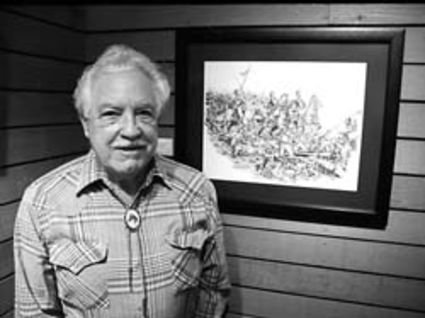 East Linn county artist Al Martin Napoletano has been bringing the old west to life through pen and ink drawings for the past 60 years. His works have appeared in numerous western magazines. Last week, Napoletano's works were on display at the gallery of Linn-Benton Community College."

Nervous energy was crackling around western artist Al Martin Napoletano Wednesday as appreciative fans admired his works and his stories during a reception held at the gallery of Linn-Benton Community College.

Napoletano has spent nearly 60 of his 82 years perfecting his craft, primarily focusing on pen and ink but often escaping into other mediums. His forte' though, has remained steadfast, western art especially illustrations that help bring tales of the old west to life.

Born and reared in San Francisco, Napoletano's western creativity might seem odd--especially since he was a machinist working on big ships--until one learns that his childhood neighborhood included a herd of horses and a hacienda with an old barn and wagons that fueled his imagination.

As friends and family mingled about the LBCC gallery peeking at a saloon gunfight, a cattle drive, or a herd of wild horses dancing across a mesa, Napoletano talked about his love of art.

"I'm a self-taught artist," Napoletano said. "The editor of western publications sent me a manuscript and told me to see what I could do. That led to about 2,000 illustrations over the years."

Napoletano's works have appeared in magazines such as Western Horseman, Horse Lovers, and Hoofs and Horns among many others.

After he retired in 1982, Napoletano and his wife, Vivian, moved to a homestead between Lebanon and Sweet Home to be closer to their daughter, Norene and son-in-law Roger Consorti. Vivian passed away a year ago.

While he retired from machinist work, he didn't retire from drawing.

"I've got something on the drawing board right now," he said.

"My mother used to say that I would crawl out of my buggy if I saw a horse anywhere near," he said.

Napoletano said his works appealed to editors because he often shifted mediums and offered them variety. He could provide scratch boards, opaques, oils and others in addition to his pen and ink specialties.

Napoletano is well known in the Sweet Home area, having produced the cover art for several Calapooia Roundup rodeo programs in the early 1990s.

A man of passion about his work, Napoletano gets especially excited when he talks about the works of his favorite artist, Charles Russell.

"He was a genius," Napoletano said.

Publishing pressures increased over the years, Napoletano said. He has watched magazines grow increasingly specialized over the decades.

Magazines that used to publish quarterly now publish monthly. The amount of time he has to prepare his artworks has decreased as has the size of his drawing boards.

"Now, because everything is scanned into a computer system, I work on 8 1/2" by 14" boards. That's confining," Napoletano said.

Napoletano's art show came about after he donated an etching press to the college. A conversation about his works ensued and soon, the gallery was contacting him to get a show together.

Nicknamed "Fuzzy" a derivative of an Italian moniker given him by his uncle, Napoletano said he was extremely pleased with the show.

"Nothing like this has ever happened this big for me," he said. "It's really great."

Gallery coordinator Sidney Rowe was impressed with the quality of Napoletano's work.

"I didn't know anything about western art illustrations until I met him," she said. "He has opened a whole different world in usage of line. He is a man who has made his own mark."

She added that it was especially interesting to view Napoletano's art in terms of time periods.

"His use of lines, ink, washes, story telling. Each frame is wonderful," Rowe said.

Napoletano's show continues through Friday at the gallery on the main campus of Linn-Benton Community College, Albany.