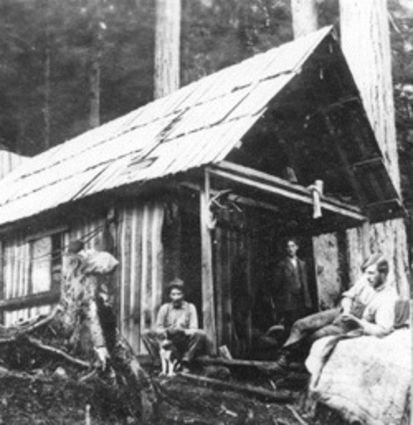 In 1843 a settler wrote, "At any public gathering it was easy to distinguish the new from the old settler. They were lank, lean, hungry and tough. We were ruddy, ragged and rough. They were dressed in broadcloth, wore linen bosomed shirts and black cravats, while we wore very coarse patched clothes, for the art of patching was understood to perfection in Oregon. But, while they dressed better than we did, we fed better than they. Of the two we were rather more independent. They wanted our provisions, while we wanted their materials for clothing."

Our settlers had be be Jacks-of-all trades! If they or their neighbors couldn't do it, it didn't get done. Cooperation was another skill our settlers had to learn. If and when they butchered, the meat was either shared with the neighbors or preserved in salt. They needed wooden casks to put the meat down in, and on the frontier you made your own. If a particular settler had a trade, such as blacksmith, cobbler, tanner, sawyer or miller, they traded and shared with their neighbors, Almost everyone had a second occupation; some boarded and taught children in their home before subscription schools were started. Small communities relied on each other to get the job done, the house built, the land cleared, the crops planted or the children educated. They could not depend on outside assistance.

Settlers had to cooperate to survive

The early pioneers realized that the pioneer who refused to assist his less fortunate fellows was soon isolated from the community.

Ameliorating what was at best a trying situation was the fact that a great amount of the new arrivals were relatives and friends. There were no hotels or inns and no money to pay if there had been any, so the first settlers had to offer a bed ton the floor) and usually dinner or breakfast to the traveler. This caused them to use what supplies they had and to become as short of food as the newcomers, so they all ended up being hungry together.

Food was scarce. By 1850 the game was already well hunted.

Deer and some elk existed but were scarce. There were plenty of blackberries, raspberries, strawberries, blueberries, cranberries and hazelnuts. In 1846 Lt. Neil Hawison reported, "I was surprised to find such a scarcity of game in the country. I lugged a heavy gun more than 150 miles through the Wilhammette (sic.) Valley, and in all that ride saw but deer. wolves are numerous and prey upon other animals so that the plains are entirely in their possession.

The little venison I saw in Oregon was poor and insipid, a fat buck is a great rarity. Elk are still numerous, but very wild, living in the depths of the forests, or near those openings where the white man has not yet approached."

Gardens were planted as soon as possible. Most common in the valley were potatoes, cabbage, peas, turnips, onions, parsley, tomatoes and carrots. Corn was grown for roasting ears and string beans were dried for winter use. If possible they grew their own tobacco and chicory for a coffee substitute.

Breaking ground for crops was done with a crude plow perhaps having no metal part except for the plow- share and, in some instances, no metal parts at all, only hand-hewn wood or a twisted piece of oak. The Earl family in Linn County prepared twenty acres of land for field and garden the first year, but that was considerably more than most families and it took them months to get the fields ready.

Boiled wheat, potatoes, salted pork and beef were the pioneers' principle foods. Wheat, the main cash crop both for local consumption and export was especially important, for, in the absence of an official currency, the provisional government made it Oregon's legal tender.

The rate of exchange was officially fixed at a dollar a bushel and merchants were required to accept it at that value.

Housing was of primary concern to the early pioneers. Log cabins and lean-to's were built until after the 1850's when sawed lumber came into use. Sometimes a double cabin was built and hewn timber construction used, but most likely the new home was a single room affair made from unhewn fir logs with a shake roof of split cedar. Before the work could begin, helves (handles) had to be made for the axes. A vehicle also had to be made of some sort to transport the Larger logs from forest to building site. Usually crude wheels or "trucks" were made by simply sawing off sections of a log and cutting a hole in the center for an axle. The screaming noise that these contrivances made under a heavy load was earsplitting and could be heard for miles. It usually took several weeks to get enough logs together to have a sufficient amount to erect a cabin. Then a shake roof, puncheon floor, attic, doors and windows had to be built--all without adequate tools and metal hardware. Without nails the pioneers were forced to use mortisetenon construction and the use of withes (pliable hazel switches) which substituted for rope or wire in binding together the roof, door or shutters. Fireplaces were made of sunbaked adobe bricks, tamped mud or wattle and daub.

Most of the furnishings were home made, although some treasured pieces of furniture made it across the plains--a rocking chair, chest, spinning wheel, or cupboard. Tables were made of stakes put in the ground and shakes put on top. Bedsteads were stakes in the ground and slats bound together with rawhide.

In 1845 the total population of the upper Willamette Valley was 2,110 men, women and children. By 1849 the population of Linn County was 923 and the total far Benton, Clackamus, Tualatin (Washington), Champoeg (Marian), Clatsop, Linn, Polk and Yamhill was 8,779.