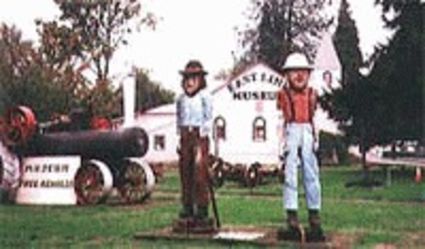 The history of Sweet Home dates back to 1851, but the real story of that city did not start until April 1, 1932, when the first freight train pulled up at the Oregon Electric depot.

For 80 years Sweet Home was a peaceful little valley.

Then all of a sudden Sweet Home became one of Linn County's most important industrialized towns, all because of timber, a modern highway and a railroad.

The first settlers, William Clark and Samuel Powell, arrived in the Sweet Home valley in 1851 but did not remain long. In 1852 Lowell Ames and his family crossed over the hill from Holley [six miles west] to start a small sawmill and to become the first permanent settlers. There on, more settlers were lured to this wilderness region.

At this time the road leading into Sweet Home came up the Calapooia valley from Brownsville, crossed the divide from Holley, and descended into the South Santiam valley. The road following the canyon from Lebanon [US Highway 20 west of Sweet Home] was not opened until years later, and then it was a poor road. Two days time was required to travel from Lebanon to Sweet Home [15 miles] with a four-horse team.

The people of the Sweet Home community in early days were active members of the Latter Day Saints Church, but not of the Salt Lake Mormon denomination.

Sweet Home was a stage stop on the road across the mountains, [US Highway 20 east of Sweet Home]. A tool gate was built in 1893 a few miles east of town -LESS-THAN-00178-a mural depicts the early toll road-GREATER-THAN-00178-.

The upper part of the town was nicknamed Mossville, the lower part was called Buckhead.

As recently as 1878 the town of Sweet Home consisted of only four square blocks, totaling 32 lots.

Almost overnight, because of the demand for lumber created by the defense program of the 1940s, the sleepy little village was transformed

into a pulsing, pushing, boom-town with logging operations starting throughout the area.

A second "shot in the arm" was given the community in 1962-63 when construction work began on nearby Green Peter dam. Instead of Sweet Home being stuck away by itself, as it was for 80 years, it now becomes the gateway to recreation and industrial activities of Eastern Linn County.