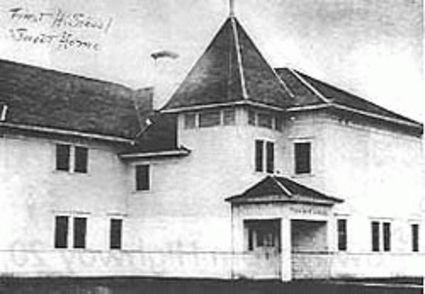 The task of establishing Union High School #2 was a thankless one. Many of the local residents did not feel the need for a high school.

They were satisfied with the schools they had and fought the idea of a high school.

Men like, F. L. Gilbert, Charles Lyons, and Jack McClure did the ground work. With the able assistance of the County School Superintendent W. L. Jackson, who also happened to be the publisher of the Albany Democrat Herald, and agreement was reached with Greenville, Pleasant Valley, Cascadia, Cowling, Liberty, Foster, Sunnyside and Sweet Home school districts to establish a Union High School. Each of the districts was to have a member represent the district on the High School board. These men were R. W. Morehead, Sweet Home; J. F. Karrang, Foster; Judd Mealey, Sunnyside; Leslie Hill, Cowling; Jacob Menear, Cascadia; Amos Horner, Pleasant Valley; and S. V. Barr, Greenville. S. R. Nothiger was the first clerk.

In 1910 one of the rooms of the old Long Street School at the fork of the Gilliland-Foster Road was partitioned off to use for a high school. In the school year 1912-13 the high school was moved into the upper church building now the Church of Christ (18th & Long Streets). R. W. VanFleet was the first principal and Miss Bertha Harper was his assistant. Heir salaries were $60 per month. Nineteen students were in attendance that year.

Three young people made history in May, 1915 by becoming the first graduating class of Sweet Home High School, then known as Union High School #2. They were Opal Russell, Roy Wood and Everett McClun. In 1916 Ross Corwin Davis was the lone graduate and the large locust tree that stands in front of the high school was planted honoring "Toot" Davis, so called because he was the bass horn player for the high school band. Sweet Home had an outstanding band in 1916 with sixteen members. Professor R. W. VanFleet was band leader. After the male section of the band left school, Sweet Home High School did not have a band for twenty years. In 1937 a petition was signed and presented to the school board asking that the school budget include funds to provide a school band. And, in 1938 twenty-nine members in brand new uniforms and some new instruments appeared at the community fair under the leadership of Mrs. Bess Edwards.

In the fall of 1912 a high school building was started on the site of the present building. John States was the contractor and the bid was $4,000. Three acres of ground and a building that consisted of three class rooms each with a cloak room and a horse shed at the rear of the property. As the enrollment increased the building was improved on and added to. In 1922 Holley, Crescent Hill and Rocky Point joined the high school and in 1929 Beulah Land, Crawfordsville, and Brush Creek joined. Finally in 1935 Over the Top became a member of the consolidation.

By 1934 enrollment had increased and the high school was no longer adequate, so it was decided to build a new high school. October 24,1934 Hoffman construction Company of Portland was low bidder for $44,232. At the same time that bids were asked for the new building, bids were also sought to raze the old building. No bids were received and on November 5, sixty-four local men started tearing down the old building. By the evening of November 6, 1934, the old high school building was no more.

On May 10, 1935 Union High School #2 dedicated its new building with eight class rooms, study hall with a stage so it could be used as an auditorium and heating plant building. The building cost $6000 more that estimated because of changes made as the building progressed.

The ever increasing necessity for more class room space and other additions made necessary another building program. In 1941 the cafeteria room was added, in 1947 a new science room wing was built. From 1948 to 1950 the new auditorium with a seating capacity of 828 was built and dedicated. These new additions put Sweet Home High School in Class A one of the state 's top institutions. An interesting side line was that in 1950 Crawfordsville, Sweet Home, Sunnyside, Holley, foster and Cascadia schools were rated among the best districts in the state.

By 1950 instead of a board member for each district on the high school board, five members constituted the High School Board. They were: Asa Smith, Glen Calvert, Ivan Hoy, Robert Brandt, and W. R. Robnett; with Asa Smith, Chairman.

From the beginning Sweet Home ranked very high in inter-school athletics. By 1950 it stood at the top of the county in basketball and was holding its own very satisfactorily in baseball and football. This was considered a remarkable record with a plus ... Sweet Home had a fine well-lighted athletic field.

Arthur Sportsman was considered a leader in the building and supervising of the Sweet Home high school. He supervised the entire plant including the manual training shop and the athletic fields, grandstands and full lighting system.