Grandpa Philpott was the oldest living blacksmith around, when I was growing up 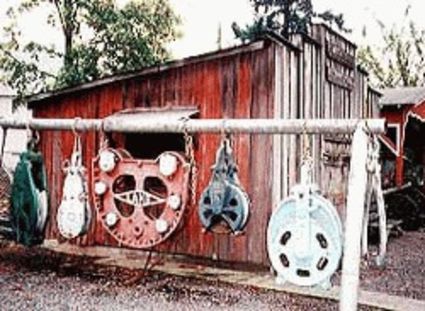 Justin Philpott's blacksmith's shop on the grounds of the East Linn Museum in Sweet Home.

The sign on the front of the blacksmith shop next to the East Linn Museum reads:

It was fun to watch him take an old chair, that anyone of us would just throw away and transform it into something beautiful. Grandpa would take a cow or deer hide, dry it out in the barn and then slowly and methodically turn that piece of hide into the most beautiful chair, or horse whip, pair of reins, or even a little pencil stop.

I would sit for hours in amazement and watch him make the most beautiful things, and he did it with such ease. We lived just down the road. My brother and I would go up and visit with Pop and Grandma throughout the day. We would go play in the old barn he had all his blacksmithing stuff in, (most of the stuff is kept at the Museum in Sweet Home now). It was fun to play with the branding irons and the old forge. He would tell us all sorts of things.

I remember going Chitum peeling up on Pop's place. For those of you who do not know what Chitum is, it is the bark off of Cascara trees, they use it in laxatives. We would load it up then bring it back to the barn and let it dry out. We would then sell it to the feed store.

Pop always kept a little out for himself, then he would go boil it on the stove, talk about something stinking.

I remember fondly when spring would come. Pop would go down to the "Philpott swimming hole" and take his sickle and cut the tall grass all around, so the swimmers wouldn't have to wade through them. Then, when everyone brought their kids down to swim, Pop would sit on the bench he made for them and talk to the mothers while their kids swam.

We knew it was getting hot -- usually in August -- when Pop would finally take off his long underwear. You could ask him all summer as the sweat was pouring off, "Is hot enough yet?" He would reply, "No, not yet!"

Equipment used in logging hangs next to Philpott's blacksmith shop at the museum. Sweet Home made history in the early '90s with its supreme court suit "Babbitt versus Sweet Home." This was a favorite spot for TV crews from Portland and Eugene to interview Sweet Home towners about the northern spotted owl crisis. Even the National Geographic magazine included the "photo" in its coverage of the Northwest environmental issues.