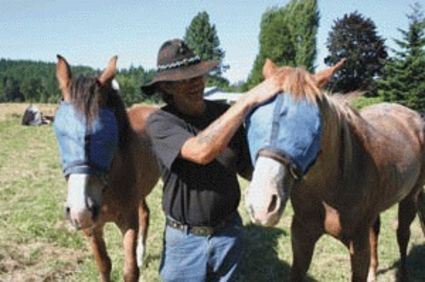 Gary Rishforth, with Buddy, left, and Roy, is riding across America to bring attention to homeless veterans.

Gary Rishforth was resting in the warm sunshine last week, awaiting a lift to Bend.

Rishforth, 56, of Medford, is a month and a half into a horseback journey that he hopes will take him through all 48 contiguous states ? and, he hopes, Alaska.

"Not!" interjected his girlfriend Bonnie Brautigam, of Phoenix, who had traveled up to the Sweet Home area to visit him, when he mentioned the 49th state.

Rishforth's ride is intended to bring attention to the plight of homeless veterans. With his two 11-year-old horses, a strawberry roan named Roy and a part mule/part quarter horse named Buddy, he plans to travel some 14,000 miles in the next four years.

"A lot of questions need to be answered as to why (veterans) are homeless,"said Rishforth, who was a heavy equipment operator before he embarked on his journey on Memorial Day. "A lot of vets don't know anything about getting benefits.

"The main thing is just to get the attention of the public,"he said. "It's just a question of 'Why are they doing this to us?'"

When he's done with the trip, he says, he plans to "lay this on the table"in Washington D.C. Plus, he plans to deliver to lawmakers an American flag that has been signed on one side by veterans and on the other by relatives of prisoners of war and soldiers missing in action.

Rishforth, who is originally from a farm near Cincinnati, Ohio, served in the 3rd Marine Division in Vietnam from 1967 to 1969, where he was shot in the leg with an AK-47, he said.

"I tried to bring it home, but they wouldnít let me," he added, grinning.

After his discharge, he struggled with post-traumatic stress and depression. He married and divorced several times and abused alcohol. He was homeless for about three years and finally wound up in what is now the Veterans Administration's Southern Oregon Rehabilitation Center and Clinics in White City, north of Medford.

Sitting in a field behind a home on Highway 228, he and Brautigam, a computer programmer, waited for a ride to Bend, where he was to participate in a veterans observance last Saturday.

After visiting Bend, Rishforth said he may take a little time to recuperate from some of the early wear and tear of being on the trail. He said he's been bucked off once by both Roy and Buddy, partly due to difficulty in mounting and dismounting that comes from his war injury.

Then he plans to head north, into Washington, to continue his journey. He switches mounts, though he said he tends to ride Roy more and use Buddy as a packhorse.

They cover about 20 to 25 miles a day on flat terrain, and about 15 in mountainous areas.

"The horses get pooped in the mountains,"he said.

Much of the start-up cost of the trip was covered by donations, including $3,000 from a Medford man to help pay for the horses.

People interested in contributing to the ride and to homeless veterans can do so to Washington Mutual Vet Ride, 3607 Crater Lake Highway, Medford, OR 97504.

Those interested in following Rishforth's progress will soon be able to do so on an interactive Web site being created by Brautigam's daughter at http://www.freeworks/vetride.com. The project's current Web site is at http://www.vetride.com, which will be updated as he progresses. Rishforth can be contacted at vetride@netscape.com.