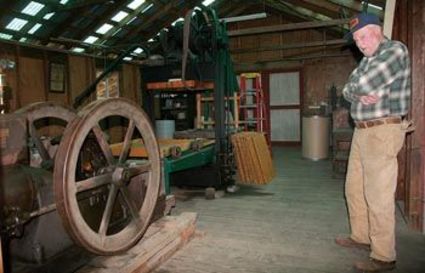 JOE BROCARD looks over the gasoline engine that powers his cider mill, which has been in operation for 100 years.

In 1913, Joseph Brocard of Piscataway, N.J., took a leap of faith and paid $170 for a large hydraulic apple cider mill, which he purchased from the Hydraulic Press Manufacturing Company in Mount Gilead, Ohio.

One hundred years later it still squeezes apples into cider – hundreds of gallons of it.

Joe Brocard of Brocard’s Antique Apple Orchard at 28095 Santiam Highway, west of Sweet Home, says the giant press his grandfather purchased has held up well over its century of life, which was celebrated Saturday, Oct. 19, at Brocard’s farm. The public got a chance to sample some of the...