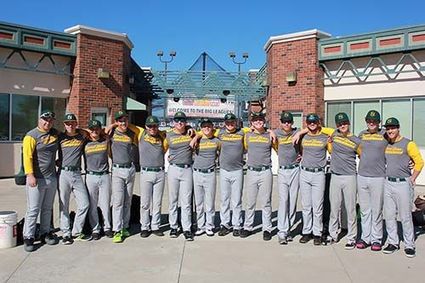 THE HUSKIES get together for a team photo during their two-day stay in Redding, Calif., where they played in the American Christian Academy Invitational tournament.

They opened with a win, 6-4, against Gridley, Calif., on Thursday.

On Saturday, Central Valley High School of Shasta Lake, Calif., scored four runs in the fifth inning to snatch a win 7-6 win from the Huskies on Friday.

Colusa (Calif.) defeated the Huskies 11-5 on Friday, and the Huskies beat Mazama High School of Klamath Falls 13-8 on Saturday.

Games were limited to two hours, with no new innings starting after the second hour.

“We played fairly well,” said Coach Dan Tow. “We had a good time.”

The weather was great, he said, and “all the teams we played were just good teams.”

The Huskies had Central Valley on the ropes, 6-3, with Daniel Virtue pitching a great game. On a pitching change late in the game, Central Valley was able to slip ahead and get the win.

“We have swung the bats really well all year long, up and down,” Tow said. “We’ve been really pleased.”

The Huskies’ defense wasn’t bad either, Tow said. The Huskies picked up seven errors combined, with five of them against Mazama, a game they won.

“Our pitching was really good too,” Tow said. Against Crescent Valley, the Huskies buckled under the pressure and gave up a few walks.

All of the team’s pitchers got to throw, he said.

The Huskies jumped out to a 7-1 lead in the first inning and never looked back, adding another four in the fourth and two in the fifth.

Mazama put three runs on the scoreboard in the third and two each in the fourth and fifth.

The Huskies put together 14 hits on the game, with Justin Tow and Cole Ashcraft leading the way with three hits and a double each. Tow scored three runs with two RBIs, and Ashcraft scored a run with two RBIs.

Recording two hits each were Brett Blachly, with a double, two RBIs and a run; Jake Long, with a run and two RBIs; and Hunter Jutte, with two runs and an RBI.

Brandon Keenon, with a run, and Colyn van Eck with two runs and two RBIs, each had a hit.

Keenon started the game and got the win, pitching 3 1/3 innings, giving up three hits, two earned runs and five walks while striking out three.

Joe Salsbery closed out the game, giving up two hits and an earned run while striking out two and walking no one.

The Huskies hit well and stayed with Colusa during the first two innings, tying the game 4-4, but Colusa scored three in the third to lock down the win, while the Huskies only managed one more run in the fifth.

The Huskies led most of the game, scoring four in the second to take a dominant lead – until the fifth inning when Central Valley took advantage of a pitching change and scored four runs to take a 7-6 lead.

At bats, Blachly led the Huskies, going 3-3 with a double, three RBIs and a run.

At pitcher, Virtue pitched four innings, giving up four hits, one earned run and two walks, while striking out two.

Stafford pitched in the fifth inning, giving up four earned runs, three hits and two walks and collecting the loss.

Seiber closed out the game, giving up a single hit and a single walk and striking out three.

Gridley led 3-2 after one inning, but Sweet Home scored a pair of runs in the second to take the lead 4-3 and never look back.

Jutte led Husky hitting going 3-4 with two runs, an RBI and a double.

Tow, and Van Eck each hit the ball twice, Tow with a run and Van Eck with an RBI and a double.

Hitting once was Salsbery with two runs.