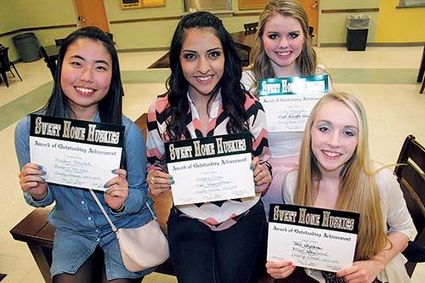 Also receiving awards from their teammates were Tori Ingram, Most Improved; Adriana Perez, Most Inspirational; and Minami Takeshita, Rookie of the Year.

“It was a good year,” said Coach Eohe Howerton. “It was a sucessful year.”

The Huskiettes placed fifth at state.

“Our exhibition was probably one of the biggest exhibitions we’ve had in years,” Howerton said. The community support was strong.

“It was fun,” she said. “The community loved those little kids.”

The exhibition, held on March 16, featured young children who attended a dance clinic with the Huskiettes on March 13.

It’s been a whirlwind since Howerton began coaching the team in June, after coaching junior high for 10 years, she said. “The best is at the end when they got to go to state.“

After many hours of practice, she was happy to hear positive feedback, she said. In one case, a Portland area coach noticed how much improvement the team made between January and state.