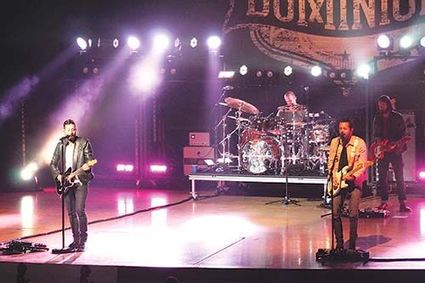 OLD DOMINION, the Jamboree’s Mystery performer, plays at the concert.

The seventh edition of the Ore-gon Jamboree’s Mystery Concert, a key concert in its Sweet Events calendar, turned out to be a big hit with a sold-out crowd when Old Dominion took the stage Wednesday, April 27.

He thinks promotional material may have given away the mystery to some folks, he said. The staff usually print a silhouette of the performer. Most performers are just one person. This one had a silhouette of multiple band members.

Quite a few people guessed who it was, he said. “They’ve had a buzz behind them all year.”

The Oregon Jamboree had Old Dominion three years ago, said Teresa Stas, marketing and sales manager. Since then, the group of songwriters with a combined total of 20 No. 1 singles for other artists has been scoring its own hits.

“That year, they started touring,” Stas said, and the group’s song “Break Up with Him” reached No. 1. The group is touring this year in support of the album “Meat and Candy.”

Three artists opened the show, including Trevor Tagle of Sweet Home, the Lonesome Valley Rounders of Corvallis and Dylan Jakobsen of Seattle.

The artists sold a lot of merchandise, Shamek said, and they put on a great show.

The concert was the third Sweet Events show this year.

Sweet Events produced a Josh Gracin show two weeks ago in Bend. That concert was a fund-raising event for the Central Oregon Veterans Ranch, hosted by The Bull, New Country 99.7, in Bend.

Unlike the promotional Mystery Concert, which is a partnership among the Oregon Jamboree, KRKT and St. Jude’s Children’s Research Hospital, the Bend concert was not associated with the Jamboree.

Gracin also performed a live-streamed show in the Skype studio in Portland as a promotion for the Jamboree earlier this year.

He will perform on Saturday of the Jamboree, July 30 and also will play the second stage that day.

Coming up on the Sweet Events schedule is Love and Theft at the Ponderosa in Portland on June 8 and then at Hardtails on June 9 in Sisters as part of the Sisters Rodeo kickoff.

Love and Theft was the Mystery Concert artist last year, but Love and Theft are not scheduled to perform at the Jamboree this year.

The Sweet Events grew out of the Mystery Concert concept about two years ago, Stas said. Staff members may find an opportunity and reach out to partners to produce an event or they may be hired to produce a show for someone else.

“They’re working out pretty good,” Shamek said. “We have to get creative to make some extra revenue. It’s something the Jamboree staff is good at, and they’re fun.”

The staff are expert at producing concerts, Stas said, so they’re a natural fit for many of the Sweet Events partners, who want to put on a concert.

The Gracin concert, held at the Harley-Davidson dealership in Bend, was a big success, Stas said, and now the organizers want to make it an annual event.

The events require different levels of involvement from Sweet Events, Stas said. In some cases, like the Skype concert, she is the only staff member needed. In other cases, like the Mystery Concert, a number of Jamboree volunteers assist.

After several Mystery Concerts, Stas said, the Jamboree staff wondered what it could do if the Jamboree could keep the artist around for a couple more shows, especially since many artists do not want to come out to Oregon for just one show.

Two years ago, Mystery Concert headliner Jo Dee Messina stayed on for additional shows, Stas said. “So we went to Portland, and it was very successful for us.” 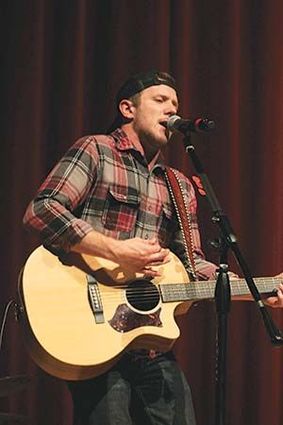 Sweet Events did it again last year with Love and Theft, with shows in Portland and Longview.

Unfortunately, Stas said, last week’s show will be the only one in the area for Old Dominion until the Oregon Jamboree.

For more information about Sweet Events, to hire Sweet Events or for more about scheduled concerts, call the Jamboree office at (541) 367-8800.