By Staff
Of The New Era 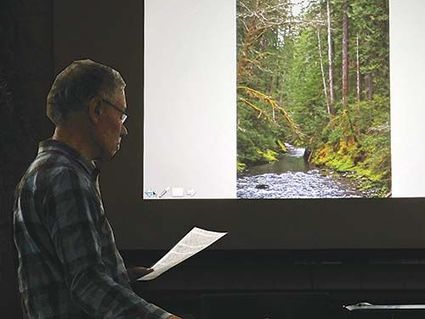 STEPHEN SHARNOFF shows slides of the area in which he and Andy Kerr are proposing to establish a half-million-acre Douglas Fir National Monument.

Stephen Sharnoff made a pitch last week to a Salem audience to gain more support for the nearly half-a-million-acre Douglas Fir National Monument he and Andy Kerr are proposing.

He was invited by the Native Plant Society to speak Thursday, April 28, in Salem.

Sharnoff, who lives in Berkeley, Calif., is working on the proposal with Kerr, a lobbyist who grew up in Creswell, and now splits his time between Ashland and Washington, D.C.

A national monument can be established by an act of congress or presidential proclamation, but Kerr and Sharnoff aren’t expecting President Obama to approv...