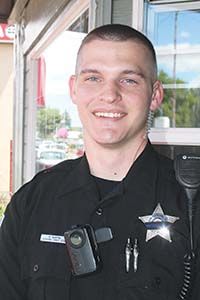 Keenan Martin wants to serve and protect the public.

The 23-year-old 2011 graduate of Sweet Home High School was sworn in as a police officer at Sweet Home Police Department on July 12. He is the son of Mitch and Lisa Martin.

After graduating from high school, Martin attended Linn-Benton Community College for two years, training in welding. He worked at Linn Gear in Lebanon for nearly three years before quitting to take the position at SHPD.

“It was always something that interested me,” Martin said, but it took him some time to decide to pursue a career in law enforcement.

It’s one of those careers, with other people relying on law enforcement personnel, that if a person isn’t committed mind, body and soul, the person shouldn’t be doing it, he said.

“We’d been talking about getting into law enforcement for about a year,” Martin said. “She was kind of the deciding factor for me.

“I hold my relationship with my family very highly. If it’s affecting your home life in a negative way, it’s time to re-evaluate.”

He’s been around police officers all his life and seen how they live their lives off duty, Martin said. He’s watched them maintain high standards, personally. That’s fueled his interest in the field.

But with current events surrounding law enforcement nationally, he wanted to step up and toe the line.

“If something were to happen, this is the position I want to be in,” Martin said. “I want to be able to protect and serve.”

Chances are, Sweet Home won’t see any major events, but if it does, he wants to be there to defend its people, Martin said. He wants to be one of those running toward the danger instead of away.

“There has to be someone going toward the problem and I want to be part of something bigger, a collective group of people that hold the same values as highly as I do.”

Martin wants to do it in Sweet Home. He and his wife bought a new house in Sweet Home three months ago with the intention of raising their children here. They have one daughter, Paisley, 1.

“Sweet Home is a special community,” Martin said. For the most part, it’s a friendly environment, something like a larger family. Outside of a year or two in Albany or Lebanon, he has always lived in Sweet Home.

“I like the school district here,” Martin said. “We wanted our children to go through Sweet Home School District and kind of grow up in a community like this one. Everyone looks out for each other.”

“If this is the career, it’s going to be with Sweet Home.”

Other agencies may pay more, but this job isn’t about money, he said. He didn’t get into this career for the money.

“You should be in this career to protect and serve,” Martin said. “Every citizen in Sweet Home has the right to police services.”

So far, Martin has enjoyed responding to calls, whether it’s a serious report or a minor noise complaint.

“You see it on their faces,” Martin said. “It’s important to them (the callers). You handle that situation like it’s serious to you. You’re a servant to the public.”

He enjoys seeing the callers reassured and happy after police respond, he said. “That’s the most gratifying.”

Police Chief Jeff Lynn said he appreciates having the opportunity to bring in an officer who grew up locally.

“It’s always exciting to be able to bring a member of our local community on board,” said Police Chief Jeff Lynn. “These people are already vested. He’s a high-character individual. He’s got a perfect demeanor for law enforcement, and we’re excited to see him grow throughout his career.”