Summer not a vacation for school maintenance staffers 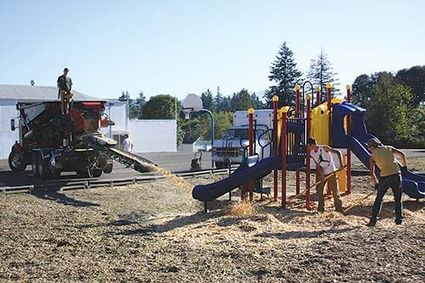 The Sweet Home School District maintenance staff completed a long list of maintenance and improvements throughout its schools over the summer, including new playground equipment at Oak Heights Elementary to the replacement of plumbing that had tested positive for lead contamination last spring.

The district had four locations that tested for too much lead early in summer vacation. Some 156 locations tested better than the standard. The district took care of two quickly and the final two at the end of the summer by installing a filter at the metal shop and changing fittings at the softball field.

During the spring, the Oregon Department of Education’s Office of Learning, Equality Unit, inspected Sweet Home High School and found the school out of compliance on several issues.

“ADA (Americans with Disabilities) upgrades became a priority, which I think is a good thing,” Darwood said. “They actually complimented us a ton. Our corrections were nothing compared to other schools.”

Among the projects were a new ADA-compliant bathroom for the Basic Life Skills classroom; ADA-compliant parking spaces in the north, south, east and west parking lots; a new access ramp on the east side of the front of the school near the auditorium; new grab bars for use by disabled people in many restrooms; changes in the wood shop restroom to make it accessible; and remodeling a few computer desks in the library to accommodate people in wheelchairs.

The maintenance crews were busy at each building in the district during the summer, with a long list of projects. A crew of 12 to 15, including temporary summer help, completed the work. During the school year, the district has 6.5 full-time equivalent employees in the Maintenance Department.

“We had a good summer,” Darwood said. “We’re still plugging away on some.”

Among upcoming projects, his crew will install a sprinkler system at the varsity baseball field, and they will work on a new front entrance, where the concrete is separating, at the Central Office.

During the summer at the high school, the district maintenance crew installed LED lighting in the swimming pool and activity gym, Darwood said. The main gym has newer more energy-efficient lighting than the pool and activity gym, but it still has problems with the lights going out. Darwood and his crew plan to see what they can do to improve them.

Darwood’s crew cleaned rust and treated metal around the pool to prevent rust, he said, and new starting blocks have been installed.

At Foster Elementary, staff remodeled the four student bathrooms, replacing floor tiles and toilets. The project included new paint, wall coverings and faucets. They installed new flooring and toilets in the women’s staff bathroom and completed a number of improvements in the kitchen, replacing the walk-in cooler and freezer and flooring.

At Oak Heights Elementary, the maintenance personnel installed a new play structure, added bark chips to the play area, rebuilt the walls at the corners of the covered play area, repaired water damage in room nine, built cubbies in Room 11, put a new roof on the lower hall and painted.

At Hawthorne Elementary, the department covered the play area entrance with asphalt to allow better access for disabled students, repaired floors and classrooms and painted. Workers painted posts to look like pencils.

At Holley Elementary, crews paved a walkway along the parking lot off Crawfordsville Drive, installed parking curbs on the parking lot, added bark chips to the play area and painted.

They completed repairs in the wrecker shop at the bus garage and installed new LED lights for the exterior of the shop. The dispatch office received new windows, roofing and paint.

They overhauled the crow’s nest at Husky Field, making the entry safer and installing new siding, roofing, doors and window covers. They repaired the home locker room after damage caused the ceiling to fall in, and they installed new locks in the locker rooms, bathrooms and crow’s nest.