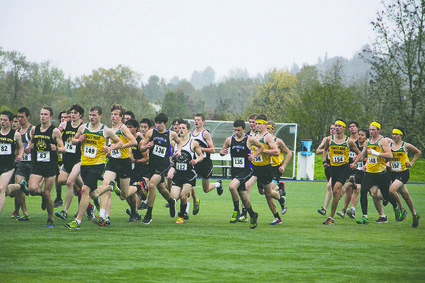 Trey Reed qualified for the state cross-country meet Thursday with a fourth-place finish at the Sky-Em district championships and the boys varsity came so close, yet so far away to making it as a team, 11 points out of first place.

Cottage Grove won the district team title with 57 points, followed by Junction City (60), Elmira (63) and the Huskies (68). Sisters’ Jordan Pollard was the individual boys champion, finishing in 16:53.7, bu the Outlaws didn’t give him much support, finishing with 89 points as a team, ahead of Sutherlin, which was sixth with 179.

All five of the Huskies’ top finishers ran all-time bests in pouring rain on the soggy course, which isn’t known as a great place to PR even when it’s dry.

“My top five all PR’d,” Coach Dan Bixler said. “I don’t know what else they could possibly do.

“If anything, we are closer than I thought we’d be. Eleven points is very little.”

Reed, a senior, finished in 17:23.9, about 25 seconds behind second-place Jesse Ellingworth of Cottage Grove (17:03.0) and Elmira’s Carson Bain (17:05.9). Reed’s time was two seconds faster than the PR he’d run a week before at Country Fair Classic, which is considered a fast course.

“I came into the race as an underdog and I really wanted to prove everybody wrong, so I put my head in the game and stuck with the pack and when the time was right, the last 400 meters, I I pulled through,” Reed said.

“The mindset was critical. Throughout the years I haven’t had the mindset to do what I did today. I’ve managed to PR in the cold rain. I think I did what I had to do.”

“I think I had a pretty good race,” Sayers said. “I was picked to get 13th. I thought I would be lucky if I got top-15. Coming in eighth was a big surprise. I’m happy about that time, too.”

Close behind him were junior Ricky Yunke in 20th (18:45.3) and senior Kobe Olson in 21st (18:46.1). Yunke, who was suffering from a cold, bettered the PR he’d run at Country Fair by eight seconds, and Olson busted a huge personal best – 40 seconds, in breaking 19 minutes in the final cross-country race of his high school career.

“When you have an upper respiratory condition, that’s pretty impressive.”

Junior Bethany Gingerich, who also doubled with soccer this year, was 22nd in the girls varsity race (24:53.7), the only Husky in that competition, which was won by Anna Barlett of Sisters (20:26.9), who led the Outlaws to the team title with 26 points.

Cameron Taber (20:23.9) was sixth in the boys junior varsity race, which combined Sky-Em JV’s with JV runners from the 5A Midwestern League, which held its varsity championships right after the Sky-Em meet. That time was a 10-second personal best for Taber, a junior.

“Cameron had a great race, breaking into the awards,” Bixler said. “There were not a lot of PRs for the JV’s, but they had a pretty good season. They watched the varsity stuff unfold.” 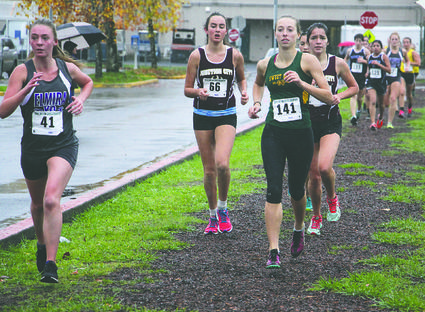 BETHANY GINGERICH runs as the sole Husky in the varsity girls race.

Reed said he expected the type of performance the varsity boys delivered.

“I’m proud of my teammates,” he said. “They worked hard. I wouldn’t have expected anything less. That’s all I can say.”

Sayers noted that the Huskies have five returning varsity members next season.

“It was fun the way it worked out,” he said. “I’m bummed that we didn’t make state this year, but that’s something we can work on next year. I think if we all push each other and just do the work, we have a good chance of going to state.”