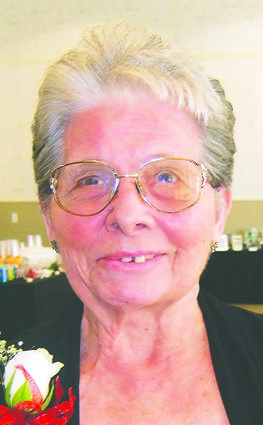 She was born March 8, 1936 in Pine Valley, Okla., the daughter of Oscar and Gertrude Chronister Harper. Gwenda came to Oregon when she was 16, settling in Sweet Home, where she met and married Elbert Hackworth Nov. 26, 1954.

Her job, like many others in her era, was being a stay-at-home mom and she was happy raising her children.

When her youngest, Winfred, started school, Gwenda took a part-time job as a waitress at the Gateway Cafe. She also worked part-time at the Babcock farm as a row boss in the bean fields during the summer months. She was hired in the housekeeping department at Whites’s Electronics, where she worked for five years.

The job she loved most of her working career was as a custodian for the Sweet Home School District. She started as a sub at Oak Heights then went to the Junior High, working the night shift several years before moving to the High School. She worked at the High School until her retirement in 1998.

Gwenda will be remembered for the embroidery, sewing projects, sports, especially watching the Dallas Cowboys, flowers, crossword puzzles and the many quilts she crafted; her involvement with “The Jamboree” even getting her picture on the program cover one year but especially family get togethers.

Being with her family and extended family were the things that made her the happiest.

Gwenda was a member of the Cornerstone Fellowship Church in Sweet Home.

In addition to her husband, Mrs. Hackworth was preceded in death by a son, Winfred; and five brothers, OB, Jimmy, Wayne, Bud and Dirrell Harper.

Memorial services will be 11 a.m. Wednesday, Nov. 30, at Cornerstone Fellowship, Sweet Home. Inurnment will be at Gilliland Cemetery at a later date.