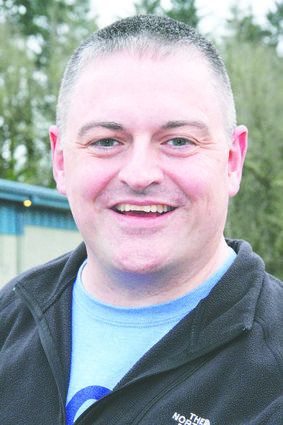 While he just missed voting on it, new Sweet Home School Board’s member Michael E. Adams said he supports his colleagues’ decision to return the district to a five-day school week.

He was among board members who voted to switch the district to a four-day week before leaving the board due to extended military service. With a vacancy created by the resignation of Nick Augsburger, the board appointed Adams to the board in January.

Adams won office in 2011 and served until January 2014. He had already served six months in Afghanistan with the Oregon Air National Guard as an adviser in the rule of law field support office. He advised Afghans on their formal and informal tribal justice systems and how to link them. During that tour, Adams continued to serve on the School Board, participating in meetings via Skype.

Later he served another active duty tour – this time for 18 months – providing legal advice to victims of sexual assault with the National Guard and U.S. Air Force. State law prohibits people serving more than 270 days of active duty from holding office in political subdivisions, and Adams had to resign from the School Board and the Sweet Home Planning Commission.

He said the military asked him to continue in the position, but he saw and took an opening in Toledo as city attorney and land use planner. He had previous experience as a civil deputy district attorney at Linn County and representing the county before the Land Use Board of Appeals.

During his previous term on the School Board, one of Adams’ priorities was preserving the swimming pool. Funding for the pool had been reduced in budget cuts, and Adams, whose daughters are swimmers, was involved in efforts to form a pool recreation district.

Fund-raising efforts pay for it, but those funds could be spent on uniforms and equipment, Adams said.

Adams was happy to see the district resume funding for a school resource officer again, he said. “While I was there, I was beating the drum for an SRO.”

The district had eliminated the SRO position in 2010 due to budget cuts.

A five-day school week was another thing sacrificed to budget cuts.

“We were being told there would have to be some huge cuts,” Adams said. The board’s opinions on switching to a four-day week were mixed, even for those who voted for it. Adams said he didn’t want to switch to a four-day week, but he ended up voting for it from Norfolk, Va., on his way to Afghanistan.

“Since then, there was at least one school board member and I had brought up the idea of going back to a five-day school week,” Adams said. The board recently voted to switch back, and he supports that decision completely.

The four-day week trades mornings, when children are awake and alert, for late afternoons, when they’re more tired and less alert, he said. He also thinks the four-day week causes issues with some children who face an extra day without being fed properly.

If he had to make the decision again, he would choose other cuts and furlough days over a four-day week, he said.

“We tried it. I think we should be done with it.”

Adams joined the rest of the board last week in a decision to send a $4 million bond request to voters in May.

If approved, he said, it will provide an additional $4 million in grant funds from the state government to improve safety and security in buildings across the district and to replace deteriorating buildings at Sweet Home Junior High School.

The bond will most likely retain the same tax rate or a lower one than already in place for a 2001 bond, Adams said. Thanks to the district refinancing the bonds twice, Sweet Home taxpayers already pay a lower rate than they did initially, and it will be paid off earlier. If approved, the new bond request would return the final 2½ years of payment originally scheduled, with a possibility of one smaller payment in 2029-30 depending on interest rates at the time of the sale.

“Because of good management, refinancing, looking ahead, this bond, it’s very important what we’re being told is (that) it doesn’t increase taxes above what they are now,” Adams said, noting that the cost will replace what the district has already saved.

It brings an additional $4 million in “free” money to Sweet Home to keep up and replace its education infrastructure, Adams said, and it will help extend the life of the district’s facilities and provide a place where students can succeed, another area he would like to see improvement. He is concerned about test scores and graduation rates.

“As a School Board member, it’s 20 percent of the iceberg,” Adams said. “Twenty percent is out of the water.”

It’s the superintendent and principals that manage education on a daily basis and put in place the things students need to be successful, Adams said. The superintendent has shown his concern for the same things, and he’s been implementing a variety of initiatives to improve student learning.

Right now, he thinks the district is headed in the right direction, Adams said. “I do think the district is concerned about academics and taking steps to raise scores. Part of the way you do that is engaging kids in school.”

Adams will serve until June 30. The position is open in the May election.

“I take very seriously the position, and I’m very thankful that the School Board appointed me and thankful to the voters who voted for me the first time,” Adams said.