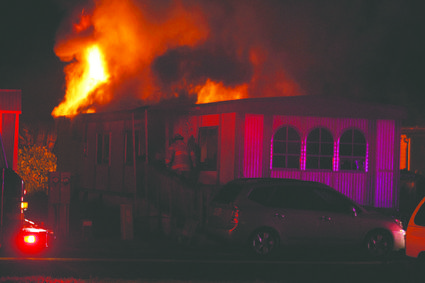 A FIREFIGHTER moves in on a burning mobile home early Saturday morning.

Firefighters responded to the fire at 4610 Main St. at approximately 2:30 a.m.

They found a fire burning in the back room extending into the hall way of the manufactured home, said Fire Chief Dave Barringer. People were sleeping in the room, but they were able to safely exit the building. No one was injured by the fire.

Firefighters were able to extinguish the fire quickly with the first-out engine, Barringer said. Additional apparatus were canceled, and a total of seven firefighters responded.

The cause of the fire remains under investigation, he said.

According to the Red Cross, the fire affected four adults, four children and several pets.