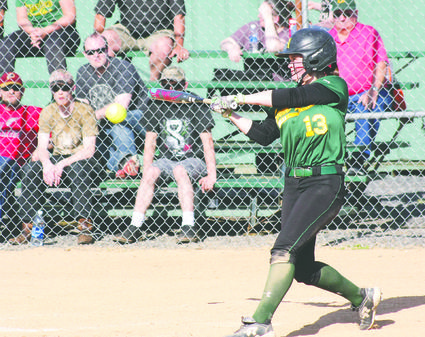 “The girls really did a good job,” said Coach Karyn Hartsook. “They worked hard to put themselves in this position. Players are starting to peak. We’re starting to fine tune our defense. Our hitting is starting to get more consistent. They’re just ready to play.”

Sweet Home, 21st in the Oregon Student Activities Association statewide rankings, will face 11th-ranked Mazama High School. Mazama is 10-5 and second in the Skyline Conference behind undefeated and top-ranked Henley.

“They’re probably comparable to us,” Hartsook said. It’s a long drive, but “it is a good draw for us.”

Sweet Home started scoring out of the gate May 9.

Ashtyn Walker led at bat, going 3-3 with an RBI and a run. Barringer and Bitter each had two hits. Zanona, Tow, Sydney Mauer and Makenna Melbye each had a hit.

Melbye hit a double, and Barringer hit a home run with four RBIs on the game. Bitter and Melbye collected two RBIs each, while Marissa Kurtz and Allison Miner contributed an RBI.

Stiner and St. Clair each had a hit for Sisters.

Pitching, Zanona, gave up two hits and one walk. She struck out 10 batters.

For Sisters, Ling-Scott gave up 11 hits, six walks and seven earned runs and struck out one batter. Hartford pitched the final out of the fourth inning.

While Zanona and the defense refused to allow Cottage Grove to score, they added another five runs in the second inning and 10 in the third to defeat the Lions.

At bat, Melbye went 3-3 with three runs and three RBIs, and Bitter went 3-4 with four RBIs and two runs to lead the Huskies.

Zanona, Tow and Barringer each had two hits, and Walker doubled, with an RBI and a run.

Barringer had a double and two RBIs. Zanona had two RBIS. Tow and Walker each had an RBI. Walker also hit a double.

From the pitcher’s circle, Zanona gave up three hits and three walks and struck out two batters.

The Lions’ pitcher gave up 13 hits, 13 earned runs and five walks, while striking out one. A reliever pitched the final out, giving up one walk.

In the second game of a doubleheader, Zanona led off with a single.

Bitter singled on a bunt to third base, and Tow hit a homerun to give the Huskies a 3-0 lead.

They scored nine more to lead 12-0 at the end of the inning and added five more in the second.

Cottage Grove scored a run in the second and third innings.

Melbye had two RBIs. Barringer, Bitter, Hawken and Miner each had one RBI.

Zanona, Bitter and Tow each scored three runs. Mauer and Hawken scored two runs each, and scoring one run were Barringer, Walker, Miner, Kurtz and Melbye.

Malmsedt led Cottage Grove, going 2-3, while Leach and McVey scored a run each.

Malmstedt pitched a complete game for the Lions, giving up 16 hits, 13 earned runs and three walks while striking out one.

With two outs on the board, Blanchet scored a pair of runs to take a 2-0 lead in the first inning.

In the final inning, Mauer walked, and Walker singled to reach base. Miner hit an infield fly out to the pitcher, and Hawken grounded out.

With two outs, Melbye knocked a home run into right field to win the game.

The Huskies had just four hits on the game, including those by Walker and Melbye. Bitter went 2-3. 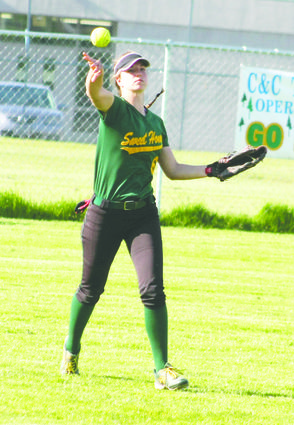 ALLY TOW makes a play from center field during the 14-0 shutout of the Outlaws. å

Tow pitched the final four innings, earning the win. She gave up three hits and three walks and struck out one.

Burchus pitched a complete game for Blanchet, givin up four hits, three earned runs and one walk while striking out six. She and Fessler led at bat, each going 3-3.