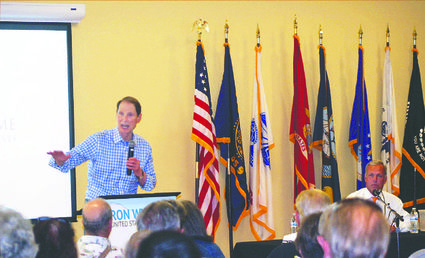 Sen. Ron Wyden took questions from a standing-room-only crowd at the Edward C. Allworth Oregon Veterans’ Home in Lebanon last week, many focusing on veterans and healthcare, including those who provide care.

A mixed audience of Veterans’ Home residents and community members filled the Activity Room of the home on July 5 for Wyden’s town hall-style appearance.

One resident asked Wyden if he was looking at a way to pay caregivers who provide care for people who are totally disabled.

“The question was about the array of services we are going to need from caregivers,” Wyden repeated to the crowd. “It’s so important. If you have an older couple at home and one needs expensive care and the (caregiver) is older...you’ve got two people on their way to a nursing home. So, yes, I very much want to see new options for caregivers to get paid and I think we’re on our way to doing something. Let me take a minute to tell everybody about the future of Medicare.”

Wyden then gave a brief rundown of how Medicare used to work decades ago. The program had two parts, Part A, which was hospitals, and Part B, which was doctors, Wyden said. That is not the case anymore, he said. Speaking of America’s aging population, he said that every day for years to come, 10,000 people will turn 65.

“If somebody comes and talks about the federal budget and doesn’t talk about Medicare, it is not on the level,” Wyden said.

Regarding the Affordable Care Act, both political parties had “missed it” on the question of Medicare, he said.

“Chronic illness folks, is 90 percent of the Medicare budget. So we are going to need exactly the kind of caregivers that you’re talking about and a very substantial fraction of that population has two or more of these conditions.”

He mentioned The Independence at Home Demonstration, section 3024 of the ACA, which Wyden said would allow payment for non-physician providers.

Updating Medicare, “should include paying those quality caregivers that we are going to need for a very different Medicare program in 2017 than the one Lyndon Baines Johnson signed into law in 1965,” Wyden said. “It’s as different as night and day.”

A woman in the audience chimed in that caregivers are underpaid.

“They don’t have retirement funds, and so they do move on,” she said. “It’s a hard job. I’d like to see some legislation to support caregivers to have a good wage, not just $9 or $10 an hour. But a good wage, retirement, vacation, sick leave. These people are taking care of our finest seniors. We really need some support for them in this home and everywhere.”

Wyden said he was supportive of her sentiment, adding that he thinks one of the best ways to help caregivers achieve that is to give them a bigger role in American healthcare.

Another resident expressed appreciation for the Veteran’s Home staff and advocate for their benefits.

“The people that are working here are wonderful,” he said.

However, he said, there is a high employee turnover because of lack of benefits and low pay.

“We’re losing very good nurses, very good CNAs and it just doesn’t seem quite right,” he said. “They’re going somewhere else for employment where they do get a retirement package and a little higher wage.”

When Wyden asked if there had been an effort to negotiate a retirement package, Mike Kelly, who is president of the home’s resident council, answered.

“They’re not state employees at all,” Kelly said. “They’re with a private company that has been contracted out through the VA. It’s a private organization that runs these companies. The federal state VA could, if they wanted, put it in a contract – make it mandatory in a contract – but that’s between them and (the company). But as far as just automatically getting a raise in their benefits, it’s not going to come from the VA, it’s going to come from the company.”

The nonprofit Veteran Care Centers of Oregon is contracted by the Oregon Department of Veterans Affairs to operate the Veterans’ Home.

Andrade said that, as of May, VCCO employs 170 universal workers who are certified nursing assistants, 40 licensed nurses, and approximately 60 other support staff, such as administrative and social workers. Housekeeping and laundry services, grounds maintenance and kitchen staff are contracted through various vendors, he said.

“(VCCO for the Lebanon Veterans’ Home) has a turnover rate of approximately 38 percent for the period of May 2016 to May 2017,” Andrade said. That rate includes all reasons, voluntary and involuntary, and is below the industry average, he said.

“The fact is that not everyone is compatible with our unique model,” Andrade said. “For example, we are the only veteran’s center or any center of our type to operate with universal workers. In my personal opinion, based in part by my 10 years of experience as a direct-care worker, mostly as a certified nurse’s aide, and three years in operations, our culture is set up with as a filter that reveals those who are in this business of caring for people for the right reasons and those who are not.

“Employees are encouraged to be self-driven, proactive and have much autonomy, unlike in many other settings.”

She started caring for her husband in 1975 when he returned seriously injured, and unemployable, from Vietnam, she said.

“As you know back then, the federal VA medical system was not even tolerable, so I hope you will think of us,” Snyder said. “I’ve been doing this for years. Thank heavens for the Oregon Veterans’ Home. This is the first time in my life that I have not thought every night about “Oh my God, has he fallen out of bed? Has he done this? Has he done that? I finally have had two years of peace because I know he is being taken care of.”

Wyden asked if Snyder had been able get help through respite care. She said she was not aware of that option.

“I very much want to make sure that we have more caregivers, that they are paid well, that they have access to benefits,” Wyden said. “I want us to have the strongest possible respite benefit.”

Snyder immediately replied: I’d be happy to chair a committee.

One of Wyden’s assistants exchanged contact information with her and another audience member who raised her hand.

Jim Willis, retired director of the Oregon Department of Veterans Affairs, told Wyden he has “a serious concern” about the veterans Choice Program versus treatment at VA medical centers.

“The VA, nationwide, knows exactly how many people are using the VA facilities,” Willis said. “They also know how many they are turning away because they don’t have room for them. They also know how much has been budgeted for the veterans Choice Program, which allows them to be treated at the community level. Now there’s got to be a formula available to fund adequately the veterans Choice Program to take those veterans that cannot be treated at the VA medical center and allow them to be treated in timely way in their communities.”

Willis said he thinks David Shulkin, who was confirmed as Secretary of Veterans Affairs on Feb. 13, is competent.

Wyden said he and Willis have talked about this topic a number of times over the years.

In a meeting with Shulkin, Wyden said they agreed that they had to work together on issues of healthcare.

The mess has fallen to Shulkin, he said.

“The very first thing we have to do is get right the question of what is the universe of people you are going to have in the Choice Program and what is the universe of the people that are going to be treated at traditional facilities,” Wyden said. “If we can get on top of that, then we can begin to think through a number of other questions, which you know more about than I.”

Wyden said he would pass on Willis’ comments to Shulkin.

“There is a concern in the veteran community that funding the Veterans Choice program at a higher level is a backdoor way of shutting down the federal VA medical facilities,” Willis said. “Now, when you speak to the good doctor, will you make very clear, that that is not what the veterans want.

That’s taken years and years and millions and millions of dollars to get that right. Let’s leave those alone and let’s fund, as I said before, the veterans Choice Program on a level based on accurate demand. That’s all. But don’t replace the VA facilities with veterans choice.”

Wyden said he shares Willis’ position and that the Choice Program was never intended to cut back on VA facilities.

“They were supposed to be mutually exclusive,” Wyden said. “There’s a really important role for both. We very very much need the traditional facilities.”

Wyden is on the Senate budget committee. In regards to funding the Choice Program as well as the VA facilities, he said there are budget choices that can be made, specifically cutting the tax breaks for the wealthy, which amount to hundreds of millions of dollars.

Kelly, who helped clarify a question about the Home’s staff, asked his own question of Wyden:

“What do you see as the biggest issue facing veterans today?”

Wyden said the No. 1 issue is “to recognize that a lot of people don’t understand how dramatically veterans’ healthcare has changed in the last few decades.”

“The reality is that our vets are surviving battlefield injuries that no one could have dreamed of 20 years ago,” Wyden said. “What happens is that if a veteran is wounded, the state-of-the-art medical services are nearby, what amounts to almost a military hospital in theater. They’re taken to one of those. If they can survive that, they’re on their way to Germany. We need to make sure that the dollars are there for vets to get the care that they deserve.”

He said he is encouraged that Shulkin “understands the healthcare challenge, but I think updating that guarantee of services is what’s important.”