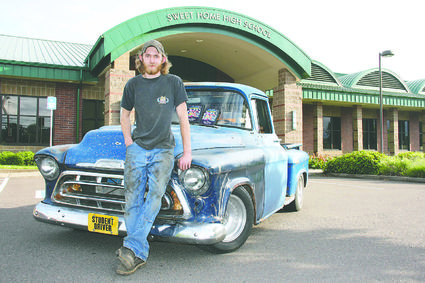 DEVON DIXON is leading the high school division at the Woodburn Dragstrip.

So far, he has completed four of five high school competitions.

After three successful races, he ran into problems with his truck July 9, starting too fast on the launch – by .22 seconds.

“It didn’t go as planned,” Dixon said. “I kind of had some mechanical issues with the truck.”

“The truck was all over the charts,” he said. “It was a guessing game.”

He worked on the truck and hit the “run tough” division for losers in the high school and sportsman divisions, he said, and he did all right.

Since then, he’s gone to work on the truck, increasing the size of the fuel line, Dixon said. It had been starving for fuel. He plans to go to Woodburn Friday to run some test passes and tune it before the races the next day, Saturday, July 22.

He thinks it ought to be ready, he said. “Hopefully, she’ll be more consistent.”

He won June 18 against two other drivers. By setting the best reaction time, .028 seconds, he had a bye in the first round.

In the finale he faced Austin Varner of Astoria.

“We ended up breaking a tranny in half, driving around and trying to tune the truck,” Dixon said. He and his father, Darrin Dixon, moved a transmission from his Camaro to the truck and found out it had partially failed. Throughout the day, it kept running slower times.

In drag racing, drivers dial in a time based on three passes and then try to get as close as possible to that time, Dixon said. Reaction times are used to break ties.

In a perfect world, the reaction time would be .000, and the driver would exactly match the dial-in time, Dixon said.

Jeff Stutznegger of Astoria, driving a 1978 Sunbird, edged out Dixon in a 1957 Chevrolet pickup in the first race of the season on April 2 after defeating Jake Meithoff and Caleb Winn to move to the finals. Dixon eliminated Varner and earned a bye in round two to move into the finals.

Dixon reacted .003 seconds too soon, giving the win to Stutznegger.

“We put a pretty hopped up small block Chevy in it, big headers, big cam and a big carburetor in it,” Dixon said. It’s got all-new MSD brand ignition, and he’s estimating 250 to 260 horsepower.

He added a new stall converter, he said. Instead of a take-off point at about 1,000 rpm, the truck takes off at 3,200 rpm, allowing it to reach higher on its power curve off the line.

This season, he is aiming for a perfect reaction time, and he hopes to beat the record, 33 races, for most drag races in a single night at Woodburn. 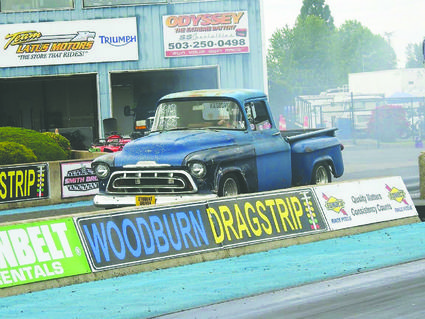