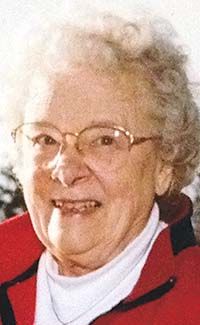 Eunice Lucille Hoien was born August 14, 1914, at home near Conde, S.D., to John Hoien and Pricilla (Anderson) Hoien, the youngest of four children.

She married Donovan Dahlgren on May 28, 1935 and in October 1936 gave birth to twins, Dennis and Darlene. They moved to California during the Depression and later to Portland, where Donovan became pastor of a Wesleyan Methodist Church.

Eunice took on many responsibilities as minister’s wife including teaching Sunday School, leading the ladies missionary society, and playing the piano for services, weddings and funerals. She also wrote poems for Christmas and other special occasions, some of which were published in newspapers and magazines.

Eunice took a job at the Crawfordsville School as secretary to the principal and while on that job took college classes and became a certified school librarian, a position she held until she retired in 1976.

She and Don traveled around the state in their fifth- wheel trailer and took trips to Alaska and Denmark. Don passed away in 1981 and Eunice continued to live in their home and was active in church.

Eunice moved to Vancouver, Wash., in 2001 to be near her daughter. There she continued with her many collections, wrote numerous letters, fed birds and squirrels, and enjoyed being near family. She was a great prayer warrior with a long list of people she prayed for every day including family and missionaries all over the world.

She passed away at the Ray Hickey Hospice House in Vancouver, and was predeceased by her husband, brother, and one sister.

A memorial service will be held at Crawfordsville at a later date.