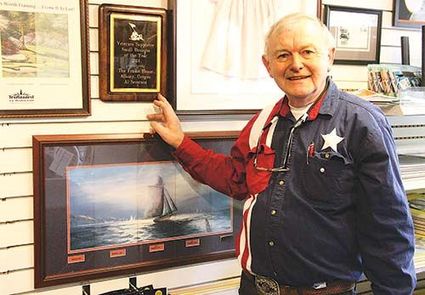 Al Severson, in his Albany shop, shows off an award he received for his involvement in veterans causes. Severson, a Sweet Home native, is longtime announcer and an organizer of the Albany Veterans Parade. Photo by Scott Swanson

When Al Severson turns on the microphone to begin his patter for the 66th annual Albany Veterans Day Parade on Saturday, Nov. 11, it will be his 45th year of involvement in the event.

He’ll announce the entries as they pass the reviewing stand on 2nd Avenue in Downtown Albany, something he’s done since he got active in the parade back in the mid-1960s, when his bosses, Dan B. and Larry Roth, owners of Roth’s Furniture store in Sweet Home, were big supporters of the event.