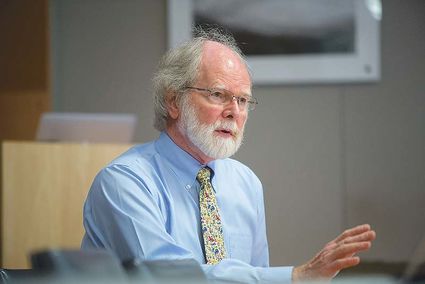 SHHS ALUMNUS Dr. James J. McCarthy, now a professor at Harvard, has been named winner of the top award presented in the field of environmental science.

When Dr. James J. McCarthy grew up in Sweet Home in the 1940s and 50s, he developed a love for the outdoors that propelled him to a career in ecology and environmental science.

This year, McCarthy, a 1962 Sweet Home Union High School graduate, has been named one of two recipients of the 2018 Tyler Prize for Environmental Achievement for decades of leadership in understanding – and communicating – the impacts of climate change.

Often described as the "Nobel Prize for the Environment," the Tyler Prize was awarded this year to McCarthy, who is now the Alexander Agassiz Professor of Biological Oceanography at Harvard University in Cambridge, Mass.

The Tyler Prize, administered by the University of Southern California, includes a $200,000 prize to be shared by recipients of the award.

"Prior Tyler Prize laureates include most of my heroes in ecology and environmental science, and it is truly humbling to be joining their company," McCarthy said last week. "It's just a great honor to be included with these other contributors. I never expected this. It makes me proud of what I've contributed and for how far our field has come."

The Tyler Prize Committee is also presenting the award to Dr. Paul Falkowski, professor in the Departments of Marine and Coastal Sciences and Earth and Planetary Sciences at Rutgers University.

"His ability to effectively and eloquently communicate the importance and risks of the climate crisis are unparalleled," said Gore, who shared the 2007 Nobel Prize with the Intergovernmental Panel on Climate Change.

Julia Marton-Lefèvre, Tyler Prize Committee chair, said U.S. scientists, including McCarthy, are leading some of the most promising research into Earth's climate, and helping to turn that knowledge into policy change.

"Climate change poses a great challenge to global communities. We are recognizing these two great scientists for their enormous contributions to fighting climate change through increasing our scientific understanding of how Earth's climate works, as well as bringing together that knowledge for the purpose of policy change."

McCarthy's pioneering research on marine nutrient cycles added significantly to the understanding of human activity on Earth's climate, according to the Tyler Prize Committee, which added that scientific research cannot be of greatest benefit to humankind unless it leads to improved policy. It was this that convinced McCarthy to engage with some of the world's best environmental researchers and international policy leaders to assess the global impacts of climate change, the committee stated.

Thanks to faculty appointments in the departments of Organismic and Evolutionary Biology and Earth and Planetary Sciences, McCarthy has investigated marine ecology and the effects of climate change in the world's oceans, with a particular focus on the nitrogen cycle.

He and his students, working at sea and in the laboratory, have generated new insights into the effects of climate on biological systems, including how climate affects the production of plankton and the marine organisms that consume plankton.

In more than 47 years in the field of biological oceanography, McCarthy has been at the forefront of synthesizing scientific knowledge about these transformations, translating this science into climate policy.

He contributed as an author and expert reviewer to the Intergovernmental Panel on Climate Change, the foremost international scientific body assessing the causes and impacts of climate change. He was co-chair in the IPCC's 2001 assessment on the impacts of and vulnerabilities to climate change and later a lead author of the seminal Arctic Climate Impact Assessment in 2004.

McCarthy's efforts to communicate the risks of climate change in novel, clear and compelling ways became an international standard in science policy.

McCarthy is an emeritus chair of the board of the Union of Concerned Scientists and former president of the American Association for the Advancement of Science. He also served as the initial chair of the International Geosphere Biosphere Programme.

He received his undergraduate degree in biology from Gonzaga University, and his Ph.D. from Scripps Institution of Oceanography.

At Harvard University, Dr. McCarthy has been instrumental in creating the institution's undergraduate degree program in Environmental Science and Public Policy, and he directed Harvard's Museum of Comparative Zoology from 1982 to 2002.

McCarthy grew up in Sweet Home, and his mother, Errilla McCarthy, remained in Sweet Home until the early 2000s, when she moved to Eugene.

"She was very involved in the town library," McCarthy said. After retiring, she was active in local literacy programs.

His father, Dr. James McCarthy, was a chiropractor who was active in the community and local sports.

McCarthy said he cannot imagine, to some degree, having the interest that has sustained him in science and his career without growing up in Sweet Home.

"That experience was a really important part of my life," McCarthy said, noting that he was active in recreation, hunting and fishing, the outdoors.

"I was very curious about birds," he said, and he spent a lot of time in the field looking at birds and their nests.

Bill Swegar taught high school Latin, and Ron King taught college prep English, McCarthy said. They were "very inspiring" when it came to higher education, and "they were primary advisers and counselors in thinking about what college might be best."

That was during the Sputnik era, he said. "There was a lot of talk about career opportunities in science."

The local Boy Scout troop sponsored by the Rotary Club was also an important influence, said McCarthy, who completed his Eagle Scout Badge. "I was very eager to participate in Scouting."

The Scouts gave him the chance to begin applying something like the scientific method, as it allowed him a template to study the birds that had so interested him.

The enjoyment of the outdoors he developed in Sweet Home was one of the reasons he chose a field like ocean science, McCarthy said. During his career, he estimated spending five years at sea on every ocean, from the arctic to the antarctic, including trips to the north and south poles.

When he left high school, he wanted to attend a smaller college, he said. He applied to Lewis and Clark, Gonzaga and another Ore-gon college.

He doesn't recall well why he chose to attend Gonzaga, he said, but Spokane, Wash., may have seemed a little more exotic.

"I had never lived outside of Sweet Home, in my memory," McCarthy said.

His undergraduate education influenced his decision to pursue a doctorate from Scripps Institution of Oceanography, McCarthy told the Gonzaga News Service, and he intends to donate a portion of the proceeds from the prize to a Gonzaga scholarship fund to support a student interested in a career in science.

"One of the reasons that I decided to pursue graduate studies in ocean science is I had such a terrific experience, not only in biology but chemistry, biochemistry, zoology, botany, genetics, ecology and physics at Gonzaga, and I didn't want to restrict my career opportunities by saying, 'I'll be a biochemist or a zoologist,' he said.

"I wanted a career to draw from all of those fundamental sciences. The confidence to do that came from the classes I took in the natural sciences.

"I've often thought that about that and about how different it could have been had I been at another school and if I had not been inspired or felt the world of science was not for me. I feel blessed having had that experience."

As part of a new program at Gonzaga, McCarthy spent a year in Florence, Italy, where he received valuable education in the humanities. He couldn't take science classes there, so he took philosophy, art history and literature.

"I think that helped me get interested in and a better understanding of the public policy process," McCarthy said.

While earning his doctorate, he had worked primarily in the Pacific Ocean off the coasts of California, Peru and Central America.

After graduation, his first job was at Johns Hopkins University in Baltimore, Md. He worked there for three years, primarily in the Chesapeake Bay.

He went to work at Harvard in 1974, conducting expeditions across the world.

The Tyler Prize recognizes, for the first time, "the role of biological processes in the life support of this planet," McCarthy said. When he got into ocean science, little was known about how the organisms in the ocean help modulate variations in the climate, helping prevent large changes.

While it's difficult to boil down to a few sentences, his work has focused on how plankton contribute to the climate through the chemistry of the ocean and atmosphere, he said. Scientists have learned since then how organisms in the ocean, from small plankton cells all the way to whales, provide a lot of buffering from extreme changes in the climate.

McCarthy is optimistic about the future of the world's climate.

He calls it a 2-percent problem.

Reducing the use of fossil fuels by just 2 percent per year through improved efficiency or new energy sources would solve climate change, he predicted. That's a simple goal for individuals, who can improve energy efficiency in their homes, turn down the thermostat and think carefully about their next appliances.

"Many people think it would be so jarring – we can't do all of that ourselves," McCarthy said, but it's already happening.

The price of alternative energy is falling thanks to government subsidies, providing incentives to businesses to make the switch, he said. Solar plants will power new data facilities in Prineville, for example.

When it comes to solar power, it's a game changer, McCarthy said. People can consume as much as they wish.

"If you factor in all the possibilities we have before us now, it can be done with little to no individual pain," McCarthy said. He noted that 35 percent of power in Iowa is from wind. Oregon is already ahead of the game with hydropower. "It's not a huge problem individually or collectively."

On May 3, Falkowski and McCarthy will deliver a public lecture on their work at the American Association for the Advancement of Science, in Washington, D.C.

In a private ceremony that evening, the Tyler Prize Executive Committee and the international environmental community will honor Falkowski and McCarthy at a banquet and ceremony at The Willard Intercontinental Hotel. 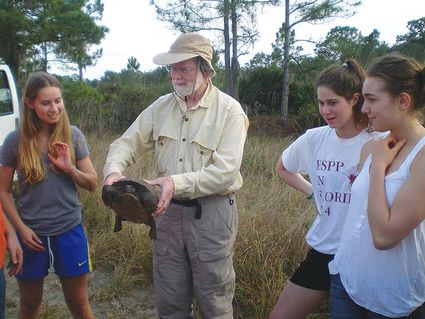 WITH STUDENTS, on a field trip to Florida, James McCarthy inspects a tortoise.