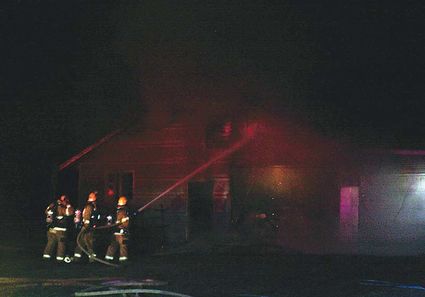 FIREFIGHTERS spray water on a shop at 28160 Hwy. 20 that caught fire early Monday morning, June 4. They responded to a report of the fire at 2:25 a.m. According to a Sweet Home Fire and Ambulance District fire report, the fire started from a spark from equipment while individuals were working on a vehicle. Damage to the shop was estimated at $15,000 and to the contents at $50,000. The property is owned by Ed Parsons. Nine firefighters responded with six pieces of apparatus. There were no injuries.

3:01 a.m. - Caller reported that he was out of town, and a neighbor called saying a male was seen trying to get into the window of a residence, 2200 block of Long. A second caller reported that a male put a ladder against a window and then took off west on Long Street. Officer responded. No evidence anyone made entry. Officer unable to locate anyone in the area.