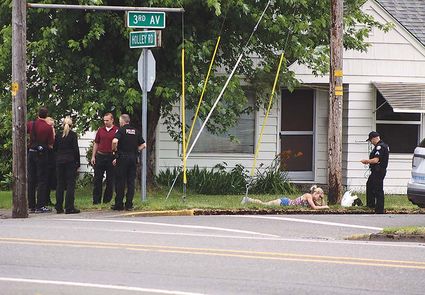 THRIFTWAY STAFF members, left, confer with a police officer as, right, another officer interviews shoplifting suspect Amanda Marie McDowell as she lies on the ground after a pursuit up Highway 228 from the grocery store.

A caller reported that a male had taken two sausage sticks worth about $10 from Thriftway, 621 Main St., at 2:46 p.m., said Community Services Officer Gina Riley. A staff member confronted the male, and he returned the sausage...