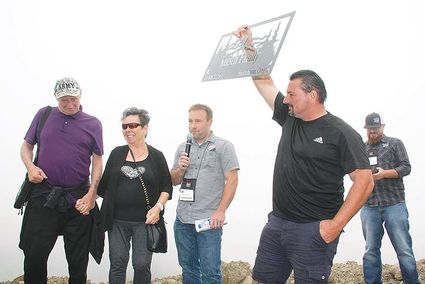 Will Garrett, center, talks about how Bill and Hannelore Kutsch of West Sacramento, Calif., were married in Sweet Home 58 years earlier on June 21, the same day a group from United Parts Network toured a logging site at Swamp Mountain. Their son, Dieter Kutsch, holds up a sign commemorating their anniversary. When the Kutsches heard the UPN convention would be held in Sweet Home, they decided they had to attend. Radiator Supply House Marketing Director Wes Collins, right, presented the decorative sign to the family.

For the Kutsches, it was a return to the place they got married – Sweet Home.

They were there as part of a United Parts Network convention hosted by Radiator Supply House.

On Swamp Mountain Thursday, June 21, in front of more than 200 visitors from across the country – as well as the United Kingdom and Australia – Radiator Supply House presented them with a decorative metal sign to commemorate the anniversary.