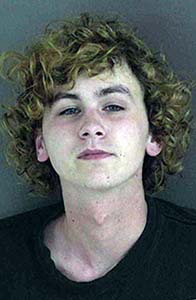 According to Chief Jeff Lynn, police were notified at about 7:42 a.m. Thursday that the store had been burglarized. The burglary and theft had occurred at 3:24 a.m. that morning, Lynn said.

At 9:36 a.m., while on routine patrol, a Sweet Home police officer observed a passenger in a white pickup that matched the description of one of the males in the theft at Safeway. The officer turned his patrol vehicle around to catch up the vehicle and found that it was parked on the 1200 block of 43rd Ave. The passenger was still at the vehicle but the driver of the vehicle had fled on foot. The officer detained the male that he had recognized from the video surveillance, who was identified as James Lee Baker, 18, of the Philomath area.

Additional officers responded to the area in an attempt to locate the male driver that had fled.

During the course of this investigation, officers learned that the pickup, a white 1995 GMC, had just been stolen from the 3200 block of Main Street in Sweet Home, at 9:09 a.m. The vehicle was recovered and returned to the owner.

Officers were able to make contact with several residents in the area and learned that an unidentified man had been in the neighborhood asking for a ride.

Officers eventually located an individual that was working on a vacant residence on the 1200 block of 41st Avenue, who confirmed that an unidentified male had been at the location and had asked to use the restroom. It was reported that the unidentified male was still inside the house.

After obtaining permission, officers entered the residence and located a man hiding inside the closet. He was detained but gave several false names to the officers, Lynn said.

Through the use of additional video surveillance, officers confirmed that the suspect was the person that had stolen the GMC pickup, Lynn said. He was identified as Matthew Everett Wood, 37, of Portland.

Both suspects were transported to the Sweet Home Police Department.

Officers located several items on the two that were believed to have been stolen during a car prowl, Lunn said. Officers determined that the items had been stolen from a shuttle bus at the Sweet Home Community Center during the early morning hours on Thursday. 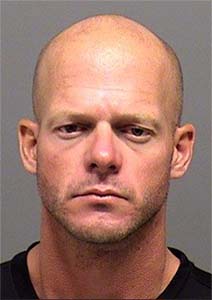 Baker was charged with the unlawful use of a motor vehicle, second-degree burglary, theft by receiving, unlawful entry into a motor vehicle and third-degree theft. He was booked and transported to the Linn County Jail.

The second subject was identified as Matthew Everett Wood, 37, from the Portland area.

Wood also had a warrant out of the Sweet Home Municipal Court for third-degree theft, which was associated with the theft of items from Midway Market in Sweet Home, and an outstanding warrant out of the Oregon State Correctional Institute for escape status on transitional leave. He was also booked and lodged at the Linn County Jail.