As Matthews steps down, interim chamber president Medellin vows to press on 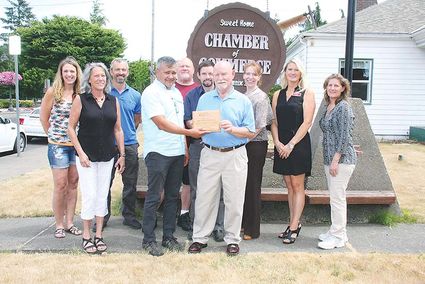 Bill Matthews has resigned from his position as president of the Sweet Home Chamber of Commerce and board member George Medellin is serving as interim board chairman until regular board elections in January.

The chamber board of directors Friday, July 13, presented Matthews with a plaque in appreciation of his leadership, which began in January 2017.

Given his leadership style, Matthews said, it is time for him to step down and turn the chamber over to someone who is more a facilitator – "I think it's time for a new generation."

"I realize that there are some unresolved issues that are on the table," Matthews said in his resignation letter. "I will do my best to help address these with the assistance of the board during whatever period the board feels appropriate and necessary. I remain committed to the success of our organization."

Matthews "helped to rebuild the foundations, getting us out of debt and back on good terms with the city," Medellin said. "And then with the legal issues they are still trying to wrap up. Most of them are dealt with."

Matthews served as president during a difficult time at the chamber. The chamber was deep in debt and in financial shambles, he said. Required paperwork had not been filed, and the chamber had lost its status with the IRS as a nonprofit organization. The chamber had to cut its executive director position in early 2017, and afterward, records were gone.

The former executive director was arrested earlier this year on charges of theft and fraudulent use of a credit card. The case is currently active in Linn County Circuit Court.

Matthews credited the board for helping restore the Chamber of Commerce.

"It was really a team effort," he said Friday, referring to the numerous current and past board members who stepped up last year to help revive the chamber. "I'm proud of what everybody's done."

He said Sandi Thompson showed up and volunteered to keep the Visitor Information Center open, and Michele Carter showed up at the right time to volunteer at the center and join the board.

"This is about them that were here during the turnaround," Matthews said. "A lot of hard work was done, a lot of hard thinking."

The chamber board talked seriously about shutting down, Matthews said, but the chamber had some timely arrivals and was able to sell the building and pay off its debts. It continues in the same location, 1575 Main St., under a lease.

Matthews is grateful to Shelly and Toney Larsen for stepping in and purchasing the historic building.

It was doubtful at one point that the city would renew its contract with the chamber to operate the Visitor Information Center, Matthews said. When the council renewed the contract, "that put the chamber on a much better footing."

It's not quite over yet, Matthews said. "There's a few little details that need to be taken care of."

But it's more like curves, Medellin said, and Matthews said he hopes the stress level is different from digging out of a tunnel.

Sweet Home has a lot of potential and energy, Matthews said. "You have to look for it sometimes, but it's there."

He told the gathered board members and staff that he has appreciated working with them.

"I'm going to spend some more time on my business," said Matthews, who owns and operates HealthMarkets, and he has a couple of vacations planned. He intends to remain active in the Rotary Club, and he plans to play some more golf.

Medellin said chamber officials will meet this week "to create potential strategies for moving forward." Those strategies will be announced at an upcoming After Hours program scheduled for 5:30 p.m. to 7 p.m. on Aug. 23 at a location to be announced.

From there, the chamber will host a membership meeting in September where the board will propose the strategies to the membership and seek feedback and input.

Right now, there's a general vision, Medellin said. "We want some specifics. It seems pretty critical just because of where we're coming from. We're calling this Phase II." 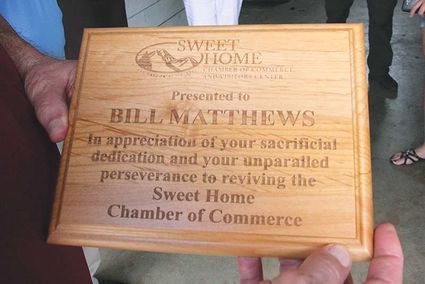 Phase I was survival, Medellin said. Phase II is about growth and reconnecting and building relationships in the business community.

Other current members of the Chamber of Commerce Board of Directors are Medellin, Ian Rollins, Carter, Hogan, Dave Bauer and Tess Yahyazadeh. Jurney and Adams recently left the board.

"We are looking for new board members," Medellin said. "We want people who are aware we are still rebuilding and are willing to join the effort."