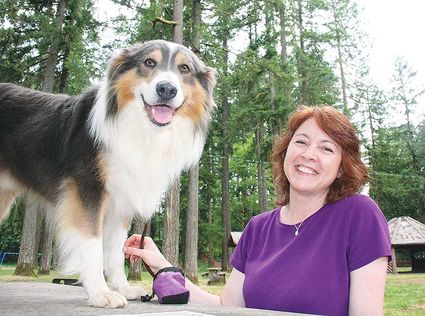 CONNIE DEBUSSCHERE, joined by her dog Memphis, talks about her plans to reopen her dog training business.

After a 12-year break from training dogs, ConnieDeBusschere is hanging up her shingle again.

DeBusschere had operated her dog training business part-time until about 2006, when she returned full-time to a more traditional job. She went to work in 2007 for the City of Sweet Home as a building permit technician, water billing clerk, planning assistant, library assistance and then as a court clerk, where she has spent several years. She also has run the summer recreation program.

She reached an agreement with the city to begin July 1 working three days a week as a court clerk with plans to reopen her business, now called Canine Training Adventures.

"Basically, there's a couple of things," DeBusschere said. "My sister (Sandy Smith of Lyons) got a puppy. She was having a really hard time finding a puppy class."

DeBusschere said classes are full across the valley, including Albany and Salem, in puppy training classes, so a need exists. Her sister had to go to Salem for a class, and it had a waiting list.

Though she's a trainer, DeBusschere said she would take her puppy to a puppy class. It gives puppies a chance to socialize and exposes them to other puppies and people. It helps them become well-mannered dogs.

"There's more than there was when I was doing it, and some specialize in other areas too,"DeBusschere said, but "there's not a lot of trainers."

Second, "my nephew has a little boy, and he's learning to be around dogs,"DeBusschere said.

People need to be aware of safety issues relating to dogs, she said.

"There's a need for training and a need for socializing dogs themselves," DeBusschere said. "And a need for education on the part of parents and children.

DeBusschere owns 25 acres about three miles outside of Sweet Home, in the Greenville area called Majestic View Ranch, and her family owns another 92 acres, she said. They have trails and the space needed for training dogs. She has a 150-foot by 100-foot area for classes, with a beautiful view of the Cascade Mountains. She also raises miniature donkeys there.

She has continued to offer training on a small scale, and she has remained active with her English shepherds and related organizations, hosting annual English shepherd events.

"I started out as a kid in 4-H," DeBusschere said. "That just planted the seed."

Today, she has more than 30 years of experience working with a variety of dogs and people of all ages, she said. She began working for a veterinarian at the age of 13, continuing there for five years. As an adult, she has been a 4-H leader and assistant trainer.

She has competed in obedience, agility, herding, barn hunt and conformation, DeBusschere said. She also competed at the first agility world championship with her English shepherd, Jasper. She has participated in numerous demonstrations, and she taught classes for the Willamette Agility Gropu and Linn County Kennel Club starting her own classes.

She has attended numerous training conferences and seminars and is the current president of the United English Shepherd Association. She is one of the founding members of the Versatile English Shepherd Awards Program.

She is a member of the Doggone Safe program and soon will be certified as a dog bite safety instructor. She also will be an American Kennel Club "Good Citizen" evaluator.

DeBusschere left the business because "life happened," she said, and she needed to take a traditional job at the time.

"I really like helping people," DeBusschere said, and since suspending her business, she has continually had students call her looking for training advice.

DeBusschere is especially concerned about safety and some of the nuisance behaviors dogs exhibit.

She spoke up at City Council on behalf of the dogs as the council was developing a new ordinance to limit nuisance behaviors like barking and running loose.

She is working with Police Department staff and others to develop a dog festival for September, which will serve as a tool to help pay for the department's drug detection dog program and to help promote responsible pet ownership, which is intended to reduce nuisance behaviors.

Working at Sweet Home Municipal Court, which is housed in the city's Police Services Building, she hears about how many dogs are getting loose and other calls involving dogs.

"People need to know what they can do to get help," DeBusschere said. In general, the dogs are just acting normally, and owners need to find ways to address the problems – the right way.

Barking and running away are mainly bored dogs, DeBusschere said. "What do you do to help entertain your dog so they don't entertain themselves and run away. I want to be able to share that with people."

As a member of Doggone Safe, when she completes her instructor certification, she wants to offer her services in the schools to teach children how to behave and remain safe around dogs.

Dogs also don't like having children hug them, DeBusschere said. That's a common cause of facial bites, usually by dogs the children know.

Dogs give signals, DeBusschere said. Her program teaches people those signals, the "dos and don'ts."

DeBusschere said that training classes will begin July 28. She will host classes on Saturdays, Mondays and Tuesdays.

DeBusschere is accepting reservations for several kinds of classes, include Puppy Head Start; Star Puppy, which prepares puppies for the Good Citizens Program; and Basic Skills, for dogs with no or little training or dogs that need a refresher.

The Basic Skills class is a prerequisite for more advanced classes in fun and games.

Additional classes include Outdoor Activities, which prepares dogs for "real-world stuff" and distractions; Dog Parkour, an urban agility program for managing and performing with obstacles; and Canine Crossfit, which uses obstacles and trains dogs for body awareness and strength.

In the future, she hopes to offer hikes with dogs and work with owners and dogs on trail etiquette.

For more information, visit the Canine Training Adventures Facebook page, email DeBusschere at connie@caninetrainingadventures.com or call her at (541) 409-1944. A website is on the way but not open yet.