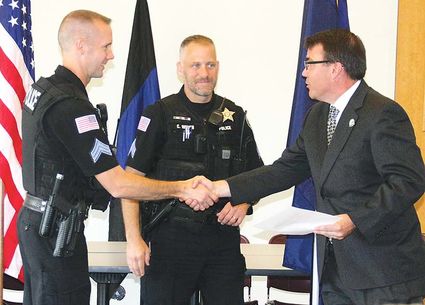 Ryan Cummings and Chris Wingo were sworn in Friday afternoon as new sergeants with the Sweet Home Police Department.

Their patrol positions were converted to sergeant positions in the city's 2018-19 budget, in addition to a new officer position that will provide additional detective and patrol time.

The number of sergeants increases from two to four, with eight patrol officers.

"This allows us to have one on each shift," said Police Chief Jeff Lynn. "It will allow 24-hour coverage. Their role is going to be to manage that shift."

Prior to their promotion, sergeants Jason Van Eck and Jason Ogden worked their 12-hour shifts from 3 p.m. to 3 a.m., Lynn said. During their off hours, they were responsible for responding when a supervisor was needed.

The four sergeants will supervise responses and prioritize calls, Lynn said, and they'll provide a lot of the decision-making for their teams.

The promotions were effective as of Sunday, Lynn said.

"Ryan Cummings has been with our department for over 15 years," Lynn said. "During that time, he has served as a field training officer, a drug recognition expert, a deputy medical examiner and a departmental instructor."

He has been a defensive tactics instructor, women's self-defense instructor, Citizens Police Academy instructor, interim detective, department videographer and photographer and a runner in the annual Law Enforcement Torch Run for Special Olympics.

"Chris Wingo has been with our department for over 10 years," Lynn said. "Chris has also served as a field training officer and departmental instructor. He regularly works with and at the Department of Public Safety Standards and Training as an instructor in defensive tactics, conflict simulations and the use of force."

"I'm extremely excited that Ryan and Chris have chosen to take the next step in their careers," Lynn said. "Both have demonstrated a commitment to this community and to the law enforcement profession. We will see good things out of these two.

"I've worked with them since they came on in Sweet Home. They've both done a fantastic job in whatever role they've been put in."

Both of them have had a large part in designing the department's training program, specifically in defensive tactics, he said. "They're both viewed as leaders within the department. I doubt you'll hear much negative about either one of them."

"I am honored just to be able to have this opportunity," Cummings said after he was sworn in by City Manager Ray Towry.

He said he was worried about his chances, knowing that Wingo was applying for it.

Wingo said he was thankful there were two positions with Cummings applying because "I have a chance now. I think a lot of Ryan, and I think he'll do a great job."

Wingo said he was excited about the opportunity.

"It's another awesome opportunity for me to continue my service to the community by leading and mentoring other officers," Wingo said.

Wingo has lived in Sweet Home 19 years and went to work as a police officer 10 years ago. He said he's enjoyed living in Sweet Home.

"It's just where we moved to when our kids were little," Wingo said. "We put down roots. It's just ended up being home."

Cummings came to Sweet Home to work as a police officer, and he has enjoyed the atmosphere of the department and the community itself, he said.

"It's been a good fit for me and the family."

"I feel like it's a natural progression to give back what I've received from the department," Cummings said ofhelping others during day-to-day activity. "I can't wait to take on new responsibilities and find new ways to give back to the department and community that have given me so many opportunities over the years."