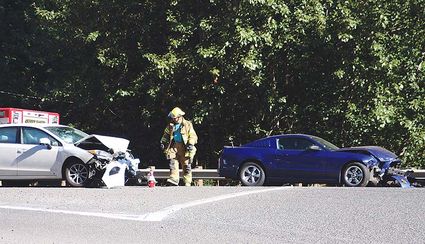 A firefighter inspects the damage after a head-on collision Saturday morning on Highway 228 in Holley.

Firefighters direct traffic around a crash that occurred Saturday morning on Highway 228 in front of the Holley Store, at the intersection with Upper Calapooia Drive at about 8:49 a.m. According to an Oregon State Police, report, a Subaru driven by Jennifer Marie Bruce, 36, failed to yield as it turned onto Highway 228 from Upper Calapooia, colliding in the east-bound lane with a Mustang driven by Delores Mae Dunaway, 61, who was eastbound on the highway. Bruce was transported to Samaritan Lebanon Communitiy Hospital and both vehicles were towed from the scene. According to the report, Bru...