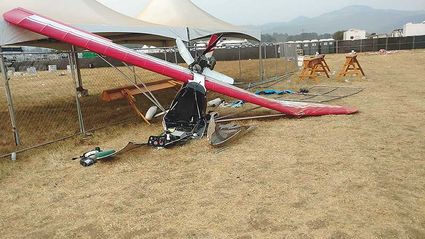 AN ULTRALIGHT plane lies on the ground at the Willamette Country Music Festival in Brownsville Monday afternoon, Aug. 20, after it crashed into temporary fencing where the beer garden had been. Linn County Undersheriff Paul Timm said deputies responded at 4:40 p.m. to find the 1992 fixed-wing single-engine plane on the ground. Pilot John Loomis, 69, of Eugene, told them he was taking photos of the area. Loomis was transported to Riverbend Hospital with minor lacerations and back pain. The FAA and the NTSB were notified and an investigation is continuing, Timm said.

1:55 a.m. - Amber Dawn Barton, 39, cited for driving while suspended and Lebanon warrant for contempt of court on original charge of second-degree theft, 23rd and Long.

3:45 a.m. - Caller reported that someone attempted to enter her vehicle, 4800 block of 48th Loop. The alarm went off and scared them away. Nothing stolen or damaged. Officer checked the area but unable to locate anyone.

6:21 a.m. - Caller reported third-hand information that there are several homeless camps on his property, 24th and railroad tracks. Officer contacted two subjects and advised them they are trespasse...