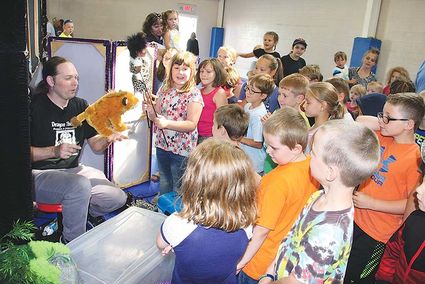 Jason Ropp of Dragon Puppets Theater shares his trade secrets with audience members during the final session of the Sweet Home Public Library's Summer Reading Program in the gym at the Boys and Girls Club. The library closed out its summer reading program with a puppet show, "Rock 'n' Roll Caveman," and carnival games.

That was the name of the caveman. And he said it a lot while he pounded out a drum solo at the Boys and Girls Club in front of dozens of children and their parents.

The program drew a total attendance of 1,025 children and 439 adults this summer. The library had 342 children and teens participate in the reading challenges for various awards.

The Summer Reading Program went well this year, said Director Rose Peda. "Definitely worth all the hard hard work by volunteers and staff."

The program was funded by the Friends of the Library, a state Ready to Read grant, the Linn County Cultural Coalition and the city budget.

"We partnered with the Albany Public Library in bringing several of the programs," Peda said. That allowed the two libraries to share the cost of performers and presenters, "reducing the travel costs they charge us."

The programs were culturally diverse, Peda said, including for example, an African program with drums and Australian storytelling. One program featured the Aztecs.

Since "rocks" was in the theme, one program focused on geology, presented by the Museum of Natural and Cultural History at Oregon State University.

Peda said she was grateful to the Boys and Girls Club "for allowing us to use their room and participating in the Summer Reading Program."

Peda also thanks the Elks Lodge, the Rotary Club, Comcast, Spirit Mountain, A&W and Figaro's for contributing to the program. 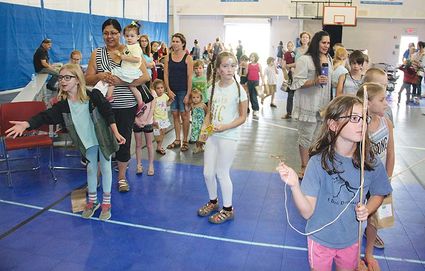 CHILDREN participating in the Summer Reading Program, try their hand at various carnival games during the final session.

Their support included funds for new books to go into the little libraries located at local schools and the Boys and Girls Club.

Peda said those continue to be popular. The little library at Oak Heights is the most popular and needs to be refilled twice a week.

The library has several programs coming up, Peda said. Adam Miller will perform a history of the labor movement through folk songs at 6:30 p.m. on Sept. 6 at the library.

At 4:30 p.m. on Sept. 18, Creature Teachers will give a presentation with reptiles.

New York Times bestseller Andra Watkins, author of "Not Without My Father," will be at the library at 5 p.m. on Oct. 19.

An open mic reading night is in the works for November.