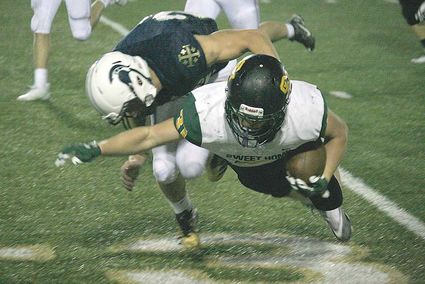 HAYDEN MCDONALD pushes for yardage as he is tackled on a play.

Sweet Home came into their season opener against Marist Friday knowing they were in for a tough matchup against a team that had just dropped down from the 5A Division.

That came to fruition in a 28-12 loss, in which the Huskies played tough for three quarters but in the fourth Marist added two late touchdowns to pull away for the win.

"We are onward and upward," said Head Coach Dustin Nichol. "I think Marist is a top-five team. After this game, it says we can run with a top-five team. It wasn't until eight minutes in the fourth quarter that we just started getting tired.