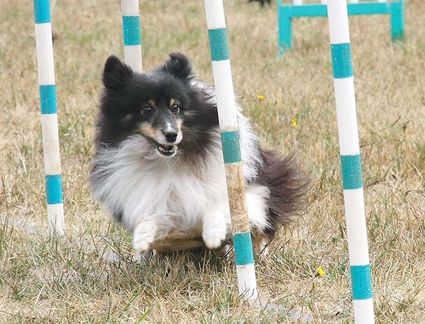 A tri-color Sheltie, True, weaves through poles on an agility course at the K9 Dog Jamboree Satruday.

Dogs had their day Saturday, Sept. 22, at the inaugural Cascade K9 Jamboree, which focused on participants' incredible senses of smell and voracious appetites in a wide variety of activities.

The event, held at the Sweet Home Events Center, featured games, demonstrations, vendors and information booths for canines and their humans.

Eight dogs – well, except one poodle-looking animal who stayed (feline-like) aloof from such base canine behavior, so really seven dogs – gave it their best shot in a "pie-eating" contest, wolfing bits of mashed potatoes and sweet potatoes down as quickly as they could. Five little dogs followed up with their own contest.

But they're dogs. They didn't do it to win. It's how they're wired. They just love food.

Connie DeBusschere, an organizer for the event, hid food in different toys in brain games, little brain teasers that rely on a dog's appetite and sense of smell to help them solve problems.

People really enjoyed the brain games, DeBusschere said. Dog owners realized, "I can do that at home. You can make your backyard or hourse into a treasure hunt for your dog."

All dogs have a sense of smell exponentially beyond humans', which helped them find the treats, but Lisa Chase's bloodhound has an even more powerful sense of smell than DeBusschere's English shepherd.

During one of four demonstrations of working dogs from law enforcement, Chase introduced her bloodhound Vera and her daughter Natali Chase. To show just how powerful Vera's sense of smell is, she made sure the dog was distracted while Natali traced a route across the Logger Olympics competition grounds, climbing over logs, weaving around the two climbing poles and then climbing into the announcer's booth.

That was a big test for Vera, said Chase, a special reserve deputy from Sweet Home serving with Linn County Search and Rescue. Vera doesn't like the open expanded metal grating used to make the ladder into the booth.

But Vera had no problem finding Natali there. Chase gave her a boost to help her part way up the ladder before Natali went ahead and showed herself.

"Vera (6) was donated to the Search and Rescue post," Chase said. "They said, 'Make it a search dog – if not you have a really nice well-fed pet.'"

Chase has one other trained search dog, Molle, a pointer, she said. "She's my tiny portable dog at 45 pounds."

Two more dogs are in training for Linn County SAR, she said.

Vera has located four missing persons during her time in Linn County SAR, Chase said. "You have to have a really special set of circumstances for a search dog to be effective."

So Vera can be busy, responding to as many as four calls per month, and sometimes, she doesn't have much to do.

Chase said she hasn't been called out since the eclipse in August 2017, but she keeps Vera busy with training when she isn't working. That training starts at 6 weeks of age, when the puppies are quickly following tiny little trails.

Around the Events Center, different organizations offered information about various services and activities for dogs and their owners. Throughout the day, pet owners entered their dogs in events like the pie-eating contest, a lure course where the dogs chased plastic bags and an agility course.

The Willamette Agility Group, with members from across the Willamette Valley, gave demonstrations, with their dogs running through small tunnels, weaving among poles, jumping and running a catwalk.

"I've been on the board for 10 or 12 years," said Cheryl Henning of Salem. In 2003, she was walking into a pet store when she encountered the Agility Group and received an invite.

"I had a 6-month-old puppy, and I thought, gee, we should try this," Henning said. While she loves her dogs, she has really enjoyed getting to know people she would never have met otherwise, she said. Members range from about 12 to 82.

The club members come from all walks of life, Henning said. "These people come together. We're all here for the dogs. We have nothing else in common but the dogs."

The goal of the K9 Jamboree is to raise funds for the SHPD's K9 program, which has been funded by donations.

It also was intended to provide resources to dog owners and to help educate them in responsible dog ownership, with a goal to help reduce the number of complaints in the community for barking dogs and stray dogs.

Community Services Officer Gina Riley said the event attracted about 200 visitors. Organizers are hoping to raise $2,000, but some expenses remain to be paid.

"It was well-received by everybody," Riley said. "It was real fun."

"I thought it went really well," DeBusschere said. "I think everybody just had a blast, really had a great time. There's a lot things that were really good. I had absolutely just the best time. It was a blast."

People enjoyed the law enforcement demonstrations, Debusschere said. "Those were all really great."

While they had it pretty well organized, DeBusschere said, they found a few things they can do to improve it. Sweet Home had two home football games that day, and they'll be looking at things like that when they plan the event for next year.

DeBusschere specifically wanted to recognize Lynn and his wife, Tiffany Lynn, for keeping things going throughout the day. 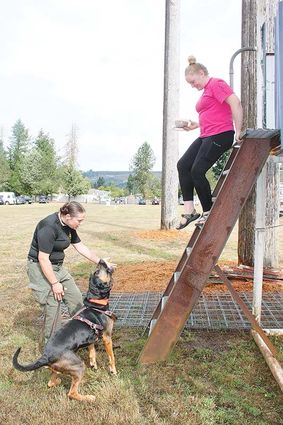 Linn County search dog Vera, a bloodhound, eagerly awaits Natali Chase as she climbs down from the announcer's booth with a reward for tracking her, while handler Lisa Chase gives Vera some encouragement.

The fly ball game was a big hit, DeBusschere said. It's a race between two teams of dogs, who must jump hurdles before bouncing off a spring-loaded box that launches a tennis ball they must catch before returning to the start across a series of hurdles.

"Some people went through and watched the agility course," DeBusschere said, and the lure course was extremely popular, with the police officers getting into the action and running their dogs through it.

"We didn't have the turnout we expected, but it went well for the first year. This will be an annual thing, getting bigger and better every year. Everyone had a good time and were asking if we were going to do it again."

Riley said the organizers wanted to thank all of the local businesses and individuals who sponsored the K9 Jamboree.