As election nears, commissioner finds himself embroiled in ongoing dispute 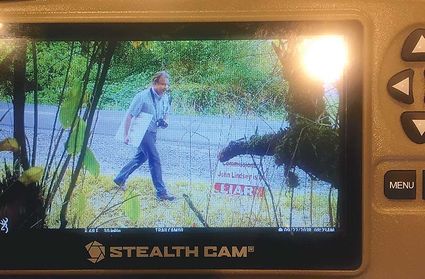 A TRAIL CAM photo shows what William Templeton says is a shot of John Lindsey removing moving around election signs placed by Templeton. Lindsey says most of the signs he collected were on public right of way and therefore illegally placed.

Linn County Commissioner John Lindsey, who is running for re-election, has found himself in an ongoing skirmish over the past several months with a relative of a former neighbor.

Albany resident William Templeton, who has filed an ethics complaint against Lindsey, has reported to authorities that the commissioner has stolen his political campaign signs. This came after Lindsey and some other neighbors who live in the Rock Hill area of Lebanon, sued Templeton's family members over a marijuana grow operation.

Templeton sent trail camera photos to The New Era on the evening of Sept. 28, depi...