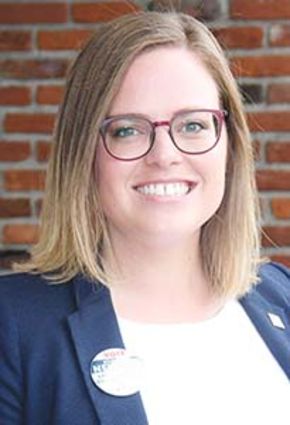 If elected to the County Commission, Stephanie Newton says she wants "to bring a fresh perspective" and will pursue businesses to create family wage jobs while expanding access to healthcare and affordable housing and increasing transparency in county government.

Stephanie Newton, a Democrat, is challenging incumbent Republican John Lindsey for Linn County Board of Commissioners position one. She faces an additional challenger, Gary Sullivan, the Independent Party nominee.

Newton, 28, is an Albany resident. She is married to Scott Azorr, and they have a 3-year-old daughter, Isla. She is a member of Albany's Human Relations Commission. She is a self-employed business consultant.

"I work with small business, basically start-ups and entrepreneurs, to create business plans and marketing plans to help navigate the first couple of years of business."

Many people have ideas but don't know how to start a business, what to charge or what to do, she said. Her father, an entrepreneur, encouraged her to pursue the idea.

As commissioner, "I would love to encourage more entrepreneurship, or encourage companies that would (provide) more family wage jobs to come to Linn County," " Newton said. "We need to market Linn County to those companies so we can increase the livability."

Efforts to recruit businesses should be keyed on mandating apprenticeships and prevailing wage, Newton said. "I'm a fan of unions. I'm also endorsed by several unions. I would like to make sure PLAs (project labor agreements) are in place."

Newton said she wants to improve Linn County's transparency. That primarily comes down to using the Internet to share more information, and as a member of the public, she has already had some success.

Newton said that information is not as accessible as it is in neighboring counties.

She regularly attends meetings of the Board of Commissioners, she said, but one day she wasn't able to attend. She wanted to see minutes from the meeting she missed, and she had to go to the Courthouse to buy the audio file for $5.

That's when she decided to start live streaming the board meetings, she said. "I believe in an open and transparent government."

The board finally started putting meeting minutes and its agenda packet online, she said, but it still doesn't have audio or video available online.

"This is the way people expect it to be online," she said. She would like to see Linn County's website include a public calendar, so people know day-to-day what she is doing. "I want to be a more consistent presence."

During her campaign, she said, she has knocked on more than 6,000 doors herself.

"I want to be an active participant," Newton said. "I want to be the most accessible, most transparent commissioner the people of Linn County are ever going to have. I want to put the servant back in public servant. I've always been interested in government and how we can make it work for the people and not for the select few."

As she visits with residents, Newton said, she's learning that people don't know her opponent, Lindsey.

She's been following the court cases he's been involved in, she said, and "I just think we deserve better representation."

The board needs someone like her to better represent the county.

Her opponent says the board gets along really well, Newton said. Her response to that is, "you shouldn't."

It shouldn't be one-sided, Newton said. It should be people with different ideas coming together for the common good and finding solutions.

"I'm running because I believe everybody in Linn County deserves to be healthy and happy," Newton said. That means making sure Linn County has more affordable housing, more housing in general, and accessible healthcare for everyone living and aging in rural areas.

"I think it's really great we have a medical school here," Newton said, adding that she would like to partner with the medical school and its students to get some pop-up clinics running in the rural areas.

She would like to see more clinics in the outlying areas so people don't have to travel 40 or 50 minutes to reach an urgent care.

It's really about fulfilling the two bottom tiers of Maslow's Heirarchy: meeting the physiological and safety needs of the citizens, Newton said.

Mental healthcare is lacking, she said. She met one woman while knocking on doors and learned her husband had taken his own life after his insurance stopped covering mental health.

The county has several tools to improve the housing situation, Newton said. That includes property tax abatement and enterprise zones, which will draw businesses and economic activity, she said.

These "are good ways to stimulate housing development," she said. "I think it's time we looked for a solution."

Newton said she thinks the commission position should be non-partisan. She doesn't think local government has much do with Democrats and Republicans.

She has talked to voters across the political spectrum, she said. She is business- and technically savvy, and she has new and fresh ideas.

"I'm a proactive person, a moderate and practical person, and I'm not 'my way or the highway.' I'm not just representing Democrats. I think I've proven I've wanted to represent everyone here in Linn County."