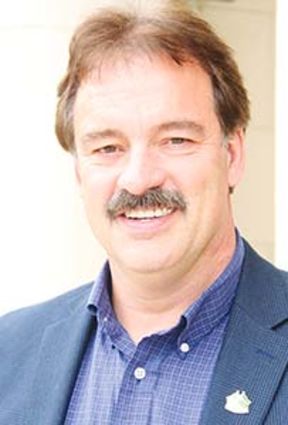 Through hard times, Linn County and its Board of Commissioners have performed, says Commissioner John Lindsey, who is running for what would be his sixth four-year term in office.

They've done more with less, he said. "We've performed. Right now, we're running with 80 less employees than the day I was elected."

At one point, Linn County operated with more than 100 fewer employees than the day he was elected, he said. "And we produce more."

The Board of Commissioners has made great selections along the way, he said, and today Linn County has "very good employees."

Lindsey is the incumbent on the Board of Commissioners Position 1. The Republican faces two challengers, Democrat Stephanie Newton, and Gary Sullivan, a member of the Independent Party.

The 52-year-old Lebanon resident is married to Linda, and they have three children and eight grandchildren. Prior to winning election 20 years ago, Lindsey was a refrigeration contractor.

He said Linn County's economic expansion has lasted for about 16 years.

In 2008, during the recession, Linn County was tested like the rest of the country, he said, but it didn't experience the difficulties other small counties did.

Instead, businesses, like Entek Manufacturing, stepped up and expanded, he said. The commissioners told them, "this might be a time to reinvest because you can't have a sustained recession."

"We're working on other projects right now," Lindsey said. "We've got a couple of projects that are really big I want to see through, The regional rail facility is going to be an incredible asset for agriculture."

Millersburg is competing with Brooks, in Marion County, for the intermodal transportation facility, he said. "We still have to fight."

The commissioners are also looking to get a third lane on Interstate 5 from Ankeny Hill south of Salem to Highway 34.

This is a "top priority," Lindsey said. "We have a lot of people that commute."

With little to no improvement on Highway 99W over the years, he said, many Benton County commuters use I-5 through Linn County, leading to congestion.

Elsewhere, "I would like to see the land we turned over to the City of Sweet Home turned into a regional park," Lindsey said, and "we're going to solve some of these wetland issues some of these cities are having."

That's an issue the county has been discussing with Lebanon, he said. The county could help mitigate wetlands or work them into the recreation system where it can be used, where the wetlands are not turned to weeds but rather "useful pieces of land that can be used by the public."

The Linn County Fair and Expo Center, his main concern when he ran for office 20 years ago, financially takes care of itself now, Lindsey said. The county is working with the cities to collect a new transient occupancy tax, which will help update and repair buildings at the fairgrounds.

That funding will come from the Albany area, while taxes collected in east Linn County will be used to help improve the parks system, he said. The county has "been on a tear" improving docks and water access, and it continues to work with the federal government expanding opportunities east of Sweet Home.

"We've done a lot of recent work in the Sweet Home area in particular, which includes road improvements around Foster Dam," Lindsey said. "We've of course opened up a couple of new parks and added a lot to the resource economy there. I still continue to work on timber issues and in fact, I will be meeting with staff at the White House this week. That discussion will revolve around national land management."

While the intermodal facility and a third lane on I-5 are at the top of his priorities, Lindsey said, "we prioritize jobs, jobs, jobs" and keeping "a business-friendly environment."

"The best way to help someone who might be in a distressed position is to give him a job," he said. "If you don't have an economy that can produce jobs, you're going to have some issues."

Lindsey said his experience makes him the best candidate for the job.

"I have a record of getting things done, and that's just a plain fact," he said. "Originally, the medical school (located in Lebanon) was supposed to go to Corvallis."

It would have taken the school three years to build there, he said. Linn County told the school to start building.

How fast a business can build is key to making money, and when red tape gets in the way, it slows businesses down.

When Selmet wanted to expand, it ran into a wetlands issue, Lindsey said. The county responded: "You build your expansion, and we'll handle the wetlands issue."

Linn County has land it can use to mitigate wetlands, he said. The county can help businesses through application processes and deal with regulations. It can stand up with businesses, like Entek when it was attacked "by Portlanders."

"You have to be loyal to the citizens and businesses in your county," he said. "We work as a team. We've been a good team together. We have the same vision."

The most important thing, "the board of commissioners has been involved in standing up to the state bureaucracies," Lindsey said, from unfunded mandates to litigation on timber.

"This will set an example, that local governments and their citizens are going to be heard, not just swept aside as someone you need every four years to vote for you."