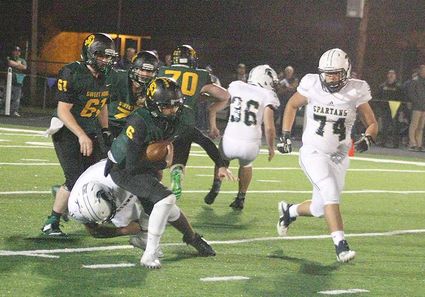 Sweet Home's football season ended Friday night, Nov. 2, pretty much the same way it started: with a loss to Marist.

Coach Dustin Nichol was hoping, going into the game, that his Huskies would improve on a 28-12 season-opening loss to the Spartans, but Sweet Home – with two brief exceptions – never really looked like it was clicking.

"It wasn't a good night for us," he said. "I'm not sure exactly what to say about it. I thought we had a great two weeks of practice."

Both Marist (5-4) and Sweet Home (6-3) had the play-in week off, so whether it was rust, playoff jitters or something else, the teams were on a level playing field, preparation-wise.

"I thought we did a lot of good things, even though we ended up losing," Nichol said. He credited the defense in particular.

"I thought they did a good job. Our offense did our defense no favors."

The Huskies got off to a faltering start, failing to get a first down or get past the 50 yard line on offense in the first half.

The Huskies went four-and-out to open the contest, and Marist took over, running back Lucas Patterson scoring from the 2 3½ minutes into the quarter to put the Spartans on the board, 6-0, thanks to a failed kick failed.

Things got a little sloppy after that, as Sweet Home went four-and-out again, then Jasper Korn recovered a Marist fumble. But the ball still wasn't bouncing the Huskies' way as quarterback Colton Smith was sacked, then intercepted.

Marist took over on its 27 line and got a fast start on the first play with a 30-yard completion from quarterback Max Campbell to Max Whittaker, but three plays later Huskies linebacker Lance Hanson scooped up a fumble by Spartan running back Jacob White and ran 52 yards to the end zone for Sweet Home's first score. Jake Swanson's kick gave the Huskies a 7-6 lead with 2:45 left.

That was it for offensive consistency for Sweet Home, which went four-and-out twice in the second quarter, while the Spartans took a 12-7 lead with 2:22 left in the half as Campbell hit Matthias Collins with an 18-yard touchdown strike.

Marist was starting to roll away, beginning the third quarter on its 35, embarking on a 11-plan drive that ended with White plunging in from the 2 with 7:36 on the clock to put the Spartans up 20-7 after Campbell hit Hagan Stephenson for two extra points with 7:46 on the clock.

After another four-and-out by the Huskies, Marist rolled 98 yards on nine plays, White bulling in from the 4 for another score to put the visitors up 27-7 with 3:41 left in the third quarter.

"We didn't have the answer to stop them in the middle," Nichol said, noting that White, at 6-0, 220, outweighed middle linebacker Boe Baxter by 80 pounds and Jake Swanson by 40.

Still, he noted, it took Marist four or five plays to score once they got in the red zone.

"To their credit, they kept fighting," he said of his team.

Perhaps key was that Sweet Home's coaching staff pulled Smith out of the defensive secondary near the end of that drive and the Huskies came roaring back with a nine-play, 87-yard scoring drive of their own in which Smith completed four pass, the last a 16-yarder to Casey Tow for the touchdown. Then Tow took a hand-off for the conversion to narrow Marist's lead to 27-15 with 44 seconds left in the quarter.

Marist came right back, and with 10 minutes on the clock in the fourth, White scored his third rushing touchdown of the night with a three-yard run to give his team its final advantage, 33-15.

The Huskies had another chance when Boe Baxter recovered a Marist fumble at the Sweet Home 36, and took the ball to the 10 yard line, aided by a pass interference call, but stalled there as Smith was unable to connect with a receiver on two attempts and then was sacked.

Marist proceeded to run out the clock.

The Spartans' dominance was evident as they ran 71 plays to Sweet Home's 48 and gained 449 yards,

including 306 through the air, to 116 for the Huskies, who finished with 56 yards passing and 60 rushing.

"We couldn't develop our running game," Nichol said, noting that Sweet Home hasn't had a 100-yard rushing game since senior Hayden Nichol went down early in the season. "Our blocking for Hayden McDonald wasn't good.

"I thought Colton had some fairly decent passes, but they did good job covering," Dustin Nichol said. "There were no open receivers."

The loss ended a six-game win streak for the Huskies, who won the league title outright.

Although Nichol is losing a significant portion of his starters, he said the younger players have gained a lot of experience this year, particularly backup quarterback Aiden Tyler, a sophomore who played led the scout team offense in practices with the varsity defense and led Sweet Home to a win over Philomath.

"People don't realize how much experience that kid has been getting," Nichol said. "We're losing a lot of guys, but we have a lot of experience coming back." 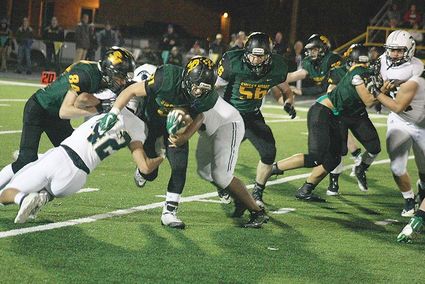