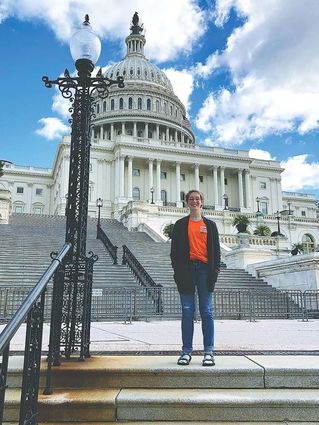 MADELYN NEUSCHWANDER stands on the steps of the U.S. Capitol during her trip to Washington for a youth summit.

Neuschwander, representing the city's Youth Advisory Council, traveled with Gourley to Washington, D.C., in October to attend the Student Gun Violence Summit. Some 150 students, many of them from schools where gun violence has occurred, attended the summit to discuss the issue and develop and action plan.

"It started off as a gun violence summit," Gourley said, but "it ended up being the conversation was about school violence."

The summit didn't end up focusing on guns, she said, and where it did focus on gun regulation, the students advocated regulations similar to what are already in place in Oregon.

Rather, Neuschwander said, the discussions turned on the safety of students.

"It's about bullying and feeling safe," Gourley said.

It was about "what can we do from the grassroots and make it better," Neuschwander said.

Many of the students there talked about friends who were dealing with feelings of depression and "how to deal with problems so they don't escalate," she said. "A large percentage of the conversation was about school resource officers and counselors. They felt that counselors could be used more for mental health issues.'"

"The focus was on being proactive and preventing the blowout (that ends in violence)," Gourley said.

Counselors and SROs who have counseling training can help identify those at risk students, she said, and "they may actually be the only positive adult they connect with every day."

It can be hard for students who have been through horrific situations at home to sit down and work at school, she said.

Gourley and Neuschwander found out that some students feel safer with an SRO in the building, while others do not.

In a lot of shootings, "they were just a normal kid," Neuschwander said. "You never know who is having those thoughts."

An armed SRO and even other precautions are a reminder that something terrible can happen, Gourley said.

In Sweet Home, Neuschwander said, the only thing she hears about the SRO is that students would like an additional officer. She had never encountered that viewpoint about SROs before.

"It was kind of eye-opening to know that SROs were scary to other students," she said.

"It's a reminder that they've been in crises," Gourley said, so programs like that should made "as friendly and inviting as possible."

It's like the old air raid drills, she said. Those were more frightening than earthquake or fire drills because there's something about "an adult coming to hurt you."

The key takeaway is to provide "tools to deal with stressors."

Neuschwander said students need to know they can call on someone for help for more information and about ways to solve problems.

In Sweet Home, where the community has more poverty and vitamin D deficiencies, which may be linked to depression, she would like to see "one more counselor specifically for (student mental health). I think that would be the best thing to come out of this conference."

During a November City Council meeting, Sweet Home SRO Geoff Hamlin gave a report outlining his work in the School District. Gourley brought up the idea of mental health training for SROs. Hamlin told the council he would take it back to his group to develop more training.

Going forward, based on Neuschwander's report to the YAC, students on the YAC will be able to take their informed opinions to the legislature next year when the group visits the state capitol, Gourley said.

Gourley and Neuschwander said they also would like to advocate for more mental health counseling, and Gourley's husband, Jim Gourley, who is a member of the School Board, said they had plans to meet with Supt. Tom Yahraes on the subject on Friday.

Neuschwander said she would like to see that counseling, where it's about more than scheduling, in the next couple of years. She added that having a place, which isn't the highly public school front office, where students who are agitated can go to decompress briefly before returning to class would be helpful too.

She said she knows several students with anxiety, and when it flares up, it's difficult for them to work.

Neuschwander said she enjoyed visiting Washington, D.C. She and Gourley were there for a couple of days in October.

"I would not want to be there over a holiday," she said. 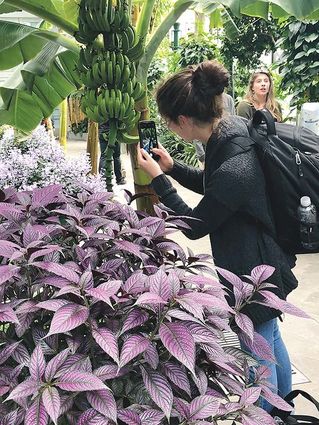 MADELYN NEUSCHWANDER photographs tropical plants during a visit to the National Botanical Gardens.

While she said she is conservative politically, she did not think many of the other students were. They tended to be liberal, and she found it helpful to hear their perceptions.

"(Grant) was called into the Civil War, and he didn't really want to do it at first," Neuschwander said. "But it was one of those things – who else is going to do it? He was not great at being president, but he was a great general."

She admires his willingness to do the job. Along with Muhammad Ali, he is one of her heroes.

In the national Botanical Garden, she was able to see a cotton plant with cotton growing in it for the first time, she said.

"That was the coolest."