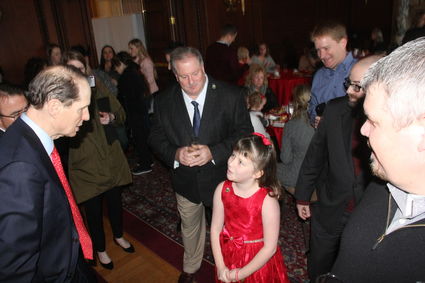 Just because of constant rush of activities, every day is whirling by in Washingon, D.C.

It's hard to believe it's just Tuesday. Our Sweet Home contingent, here to participate in the lighting of the U.S. Capitol Christmas Tree, opened the day with breakfast in the Library of Congress, located across the street to the east of the Capitol.

As we arrived, the lines to pay respects to President Bush had dwindled. Just a few people stood outside, waiting to enter the rotunda through the below-ground front entrances, while the street remained closed and the Capitol grounds remained fenced.

Sens. Ron Wyden and Jeff Merkley dropped in, and fourth-grader Bridgette Harrington of Hillsboro recited the poem she wrote that led Gov. Kate Brown to select her to throw the switch on the Capitol Christmas tree.

Breakfast was pretty good – if not a real breakfast. We had genuine Oregon doughnuts, some encrusted with bacon. I ate one of the tasty chocolate ones encrusted with more chocolate. A couple of people kept walking around offering us these tiny bite-sized three-pancake stacks, and one table had some quiche.

Following breakfast, Sweet Home people began filtering to the west side of the Capitol, for most of us our first look at it. The area was fenced, preventing anyone from getting near the tree.

Linn County Commissioner Will Tucker and his wife, Lynne Tucker, joined Mayor Greg Mahler and councilors Dave Trask and Susan Coleman and her husband, Matt Coleman; City Manager Ray Towry; and my wife, Tiffany Morgan, between the Capitol and the tree for a quick photo while we waited for Sweet Home's Forest Service contingent to arrive and get our group access to the tree.

Once they arrived, we headed inside where we got a photo of everyone we could think of from Sweet Home. Along with Cassie Richey, joining us from the Forest Service were Chris Sorensen, Jared Richey, Sweet Home District Ranger Nikki Swanson, Joanie Schmidgall, Stefanie Gatchell, Lance Gatchell and Regan Eivers.

We took a "The New Era on the Road" photo with the newspaper containing the story and photos from Sweet Home's send-off of the tree, too!

And then we were hungry.

A doughnut and some orange juice doesn't go far. We all parted ways. The Richeys joined me and Tiffany for lunch – real food and not at one of those weird semi-pretentious-but-kinda-run-down, not-national-chain pub-restaurants.

Jared found a Quiznos nearby. A bitter, cold wind had kicked up, and the wives were very happy to get inside that wonderful slice of heaven.

Yes, Quiznos. I love it. It's almost as great as Arby's and 23.7 times better than Burger King; and I can never find one in Oregon any more. And the hot peppercorn steak sandwich was absolutely the best meal I had all week.

After lunch, we stopped at the National Archives, where we were able to see a copy of the Magna Carta. We couldn't read it. Someone went and wrote the thing in Latin, but I'm very thankful they did. It was part of an exhibit describing its influence in the development of the most important, the second most important and third most important documents in the United States upstairs.

According to the National Archive Museum, King John affixed his seal to the Magna Carta on June 15, 1215, consenting to the demands of 40 rebellious barons in order to avoid a civil war. Ten weeks later, Pope Innocent III nullified it, and England plunged into an internal war.

While it was written by 13th-century barons to protect their rights and property against a tyrannical king and the interests of mere commoners was not likely even the slightest bit on their minds, it contained the same values infused into the Constitution and the Bill of Rights.

The Magna Carta guaranteed rights, and the American colonists thought they should have the same rights as Englishmen. They incorporated them into their state laws and eventually into the Constitution and the Bill of Rights.

Those rights, and the protection of them has always been the purpose of the Constitution and the Bill of Rights. Unfortunately the new federal government managed to start violating those rights (Alien and Seditions Act – for example) very quickly regardless of the ideals the founders had just enshrined.

Heck, as a way to get it ratified, the Constitution itself managed to institutionalize rights violations with the Three-Fifths Compromise. We the people just keep messing things up, but we've got this ideal. We have the Magna Carta to thank for getting that ball rolling.

On display in the National Archives is one of four surviving originals of the 1927 Magna Carta, courtesy of billionaire David M. Rubenstein.

President Franklin Delano Roosevelt said of it in his inauguration: "The democratic aspiration is no mere recent phase in human history . . . It was written in Magna Carta."

Unfortunately and obviously, democracy isn't necessarily a cure for squat. Mob rule can be completely democratic and is no guarantee against evil.

But that doesn't mean we didn't and don't try, and at times, these ideals even help constrain the worst impulses of democracy.

Upstairs from the Magna Carta, the most important document in America's history declares: "We hold these truths to be self-evident, that all men are created equal, that they are endowed by their Creator with certain unalienable Rights, that among these are Life, Liberty and the pursuit of Happiness."

It's the document that declared American independence from England. Most importantly, it explains why: "That to secure these rights, Governments are instituted among Men, deriving their just powers from the consent of the governed."

You can't read it on the original Declaration of Independence. It's too faded after 242 years. But it is something to read a 200-year-old copy of it preserved in the archive vaults. U.S. Secretary of State John Quincy Adams commissioned a full-size copperplate engraving that was used to print some 200 copies of the Declaration. It is the most frequently reproduced version of the Declaration.

To the right of the Declaration of Independence is the third most important document in the country, the Constitution. The Declaration explains the "why."

The Constitution explains "how" our government is to function. To the right of that one is the second most-important document, the Bill of Rights, the first 10 amendments to the Constitution. As the name implies, they outline the "what," examples of our rights, all of them derived logically from the three described in the the Declaration.

Two men stand guard beside the Constitution. I'm not sure what their role is. Most likely, they protect against flash photography, which can further damage the already worn and damaged documents. Photography of any kind is banned, probably a blanket ban to avoid accidental flash discharges – one of those oft-repeated situations where one moron ruins it for everyone else – then again, you'd have to carry a tripod and open the shutter for a minute to capture an image of the documents.

Regardless, those guards – Mahler said there were four in the room when he went there – have the most important and coolest job in Washington, D.C.

President Trump is just a president. Ron Wyden and Jeff Merkley are mere senators. Peter DeFazio is just a congressman.

At least, on a symbolic level (we have the words preserved in many other ways today), they're guarding the nation's founding documents. And they literally protect the physical presence of the original documents.

It might be a relatively boring job, but at the end of the day, they go home and tell their friends and family they guard our founding documents. At the same time, some are very friendly and talkative, full of bits of information about the documents, and seem genuinely proud of what they do.

That ended our day around the Capitol. Turns out one of my cousins moved to Virginia, near D.C. He and his wife dropped by and grabbed us for dinner.

We found this interesting little weird semi-pretentious-but-kinda-run-down, not-national-chain pub-restaurant, El Chuco. It had this semi-inexpensive menu full of mostly tacos, all of them relatives of those street tacos you find at farmers markets and on food carts.

I ordered a thing, its name I couldn't read or remember, for 11 bucks. When I got my order, it was three little round flatbread type things, two piled up with asada and the other with cabbage and pollo. My heart sank while my stomach growled.

Then I tasted them – absolutely incredibly good and surprisingly, filling. I heard the same about the other tacos our party ordered. Everyone was happy. I'm not good at reviews and especially not with food. I can't really describe what makes it better, but it was. Wow. Yum. If you like the Mexican food (no idea if it was authentic or not and don't care) and you're ever in D.C., check it out.

We wrapped up the day listening to the eternal sound of sirens. (See Day 2 report...)