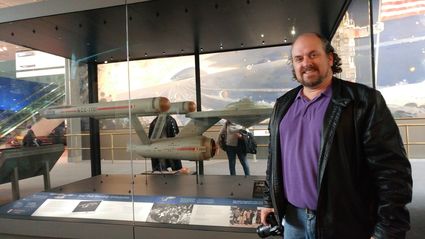 Sean C. Morgan makes a stop at one of the truly important sites in Washington, D.C.: the "Star Trek" USS Enterprise display at the Smithsonian National Air and Space Museum.

We woke to the sounds of sirens.

I'll need to learn the "Sounds of Silence" soon so I can rewrite the lyrics and sing "The Sounds of Sirens" or an "Ode to Washington, D.C."

We watched President Bush's state funeral on television. We watched as servicemen carried his casket to a waiting hearse at the Capitol, the very place Dave Trask, Greg Mahler, Susan and Matt Coleman and I had been two nights earlier to pay our respects, for transport to the National Cathedral.

Afterward, we decided to head on down to the Capitol Mall to take in the Smithsonian National Air and Space Museum. That was my favorite Smithsonian museum when I was a small child, though this time it was on the wrong side of the mall from what I remembered – not quite where I left it.

As a child and "Star Trek" fanatic, I was delighted to find what I did remember as a small model, maybe a foot long, of the USS Enterprise hanging in the museum in the late 1970s; and I looked forward to finding it again. This time, the studio model was 11 feet long and displayed behind glass.

I had Tiffany, my wife, get a shot I could send to make all my "Star Trek" nerd friends jealous – this was, obviously, the second most important thing we did all week after seeing our nation's founding documents.

The Smithsonian Institution restored the model, donated by Paramount Pictures in 1974, to its appearance during the filming of "The Trouble with Tribbles" in August 1967, which was the last known modification of the model during the production of the original "Star Trek."

Other displays featured less important artifacts of the real world, like the Spirit of St. Louis, flown by Charles Lindbergh on the first nonstop transatlantic flight in 1927. Also on display is the 1903 Wright Flyer, the first powered aircraft to fly, and the North American X-15, an experimental rocket-powered plan that set the world record for aircraft speed at 4,520 mph in 1967. Elsewhere are World War II aircraft, the British Supermarine Spitfire, the U.S. P-51 Mustang, the Japanese Mitsubishi A6M Zero and the German Messerschmidt Bf 109.

We only made it by two other museums, but obviously, the Air and Space Museum is still the best.

I had to bail out early. Tiffany continued exploring the museum with Dave Trask and Greg Mahler while I went to see Rep. Peter DeFazio at his office south of the Capitol in the Rayburn House Office Building, where I found a sign on the door announcing which staff member's dog was in the office.

The staff members take turns bringing their dogs to work. I met Elsie, a friendly mutt that may have some type of Australian shepherd and looks like a longer-legged version of a Corgi owned by a buddy of mine. One of the Capitol Christmas Tree companion trees is set up in a corner of the office with a tree skirt made by Peggy Schroder of Sweet Home.

Staff members were friendly, bringing me a glass of water after a brisk walk on a relatively warm day. They also appeared happy, answering my million questions about working in a congressman's office, living in Washington, D.C., and other trivialities I was curious about.

I chatted with DeFazio, who is the incoming chairman of the Transportation and Infrastructure Committee, his first chairmanship after 32 years in office, about local and national issues, grabbed a photo of him on his balcony, with the Capitol building in the background and left him to the next appointment on a busy schedule while I tried to figure out how I was going to find my geographically illiterate wife.

She was headed to the National Archives Building with Trask and Mahler when I called her. She had already gone there the previous day. I figured she was at Pennsylvania Avenue, where the archives are located, when I contacted her.

I managed to cross the mall in front of the Capitol before I was able to ascertain her true location through a game of 57 questions that had to involve any other words besides "west," "east," "south" or "north." I couldn't use the names of any of the buildings either.

She planned to wait while I interviewed Wyden, who showed up a little after we arrived, with a wild change of plans. Wyden and his press secretary, Nicole L'Esperance, poked their heads in the front door and asked if we could walk and talk. I'm guessing Wyden wanted to make sure it was a memorable visit, or maybe he was just trying to appear more fun than DeFazio.

I pulled out the old notebook and went to work. Joined by two other staff members, I started asking questions, and Wyden started answering as we quickly headed for the "Senators Only" elevator. Writing as I walked, Wyden put a hand on my back to keep me pointed in the right direction.

The elevator took us to the basement, where we entered a small rail car, part of the Senate subway system, and found ourselves whisked underground to the U.S. Capitol, where we headed up some stairs toward Wyden's destination.

I was busy writing, but the wife said three reporters collapsed on our group, asking questions as we headed up the stairs. Wyden told them he couldn't talk to them right then because he was busy with constituents. We soon found ourselves just outside the Senate floor.

We couldn't enter the floor and had to wait in a reception area while Wyden delivered comments opposing the confirmation of Bernard McNamee to the Federal Energy Regulatory Commission. The Senate voted 50-49 along partisan lines to confirm McNamee the next day. Wyden pulled up a chair in the reception area after delivering his comments and finished the interview, fondly recalling his visit to Sweet Home in November for the Christmas tree parade.

"I just want to tell everybody in Sweet Home how proud I am of what they are doing in that area and the message it sends," he said. "You want to see how to bring people together, spend some time in Sweet Home. I had a wonderful time there in the beginning of November with the parade and the tree."

That left Tiffany and I about an hour to change hats from journalist to tourist, and we made the long walk back past the Sculpture Garden to the Smithsonian Museum of Natural History. These museums are huge, and it takes a lot of time to go through them.

That meant we only had a short time to look at the Hope Diamond. We decided stealing it would be unwise. A guard was leaning against a wall in the room and looked half asleep. We assume that's all part of the game to catch unwise and careless Hope Diamond thieves.

That rock, a diamond, one of the most pointless gemstones in existence – except for industrial applications – adorned the entrance to the best rock shows in existence, with far more interesting specimens. A number of famous jewels were on display in the next room. Sure, it had giant rubies and emeralds, but it also had a huge quartz sphere, which refracted and bent upside down images of the room where we were standing.

And in the next room were the real treasures, stones and minerals and rocks and gems of every kind imaginable in sizes you don't find at local rock shows, the myriad forms of calcite and numerous fuzzy-haired minerals, like chrysotile, related to asbestos along with a big chunk of actual asbestos.

A towering pyrite specimen, a series of five cube-shaped crystals 10 or 12 inches tall, shared a room with a mass of quartz larger than my wife and I combined, a giant growth of gypsum and a rose quartz as large as a basketball.

It was closing time by the time we hit the exhibit on lead mining. We started heading out, but it was tough going. The museum had an amazing exhibit on volcanoes, including basalt specimens formed by Mt. Kilauea in Hawaii in 1995.

We returned home where we ate some pizza and visited with the councilors and city manager and turned in for the night to the sounds of sirens.