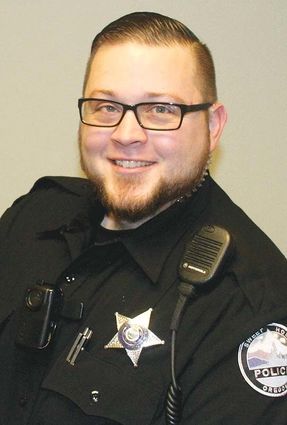 After starting work at Sweet Home Police Department on Nov. 15, Ethan Rowe is doing what he's always wanted to do.

Both officers grew up in Sweet Home, Lynn said, but it wasn't intentional.

The department is running a background check on a third new officer, who will also need to pass a psych test, Lynn said.

Rowe is filling a position left by an officer who did not complete the training program, Lynn said. The second position is a new position authorized in the 2018-19 budget. The third position was vacated in November by Officer Brian Stevens, who took a position with the Oregon State Police Albany Area Command. He had been a Sweet Home officer for more than 14 years.

Rowe will begin the Police Academy later this month.

Rowe, 28, was born in Lebanon and moved with his family to Arkansas. The family returned to the area, settling in Sweet Home when he was 8 years old.

He is a 2010 graduate of Sweet Home High School, where he participated in football, wrestling and track. He was a volunteer at the Sweet Home Fire and Ambulance District for about four years, three of them during high school.

After graduation, "I just went right into working" for Tony McGovern in parking lot maintenance, Rowe said. "He helped me a lot with being a responsible young man."

That led him to fulfill a long-term goal, working with and helping adults with development disabilities through the Oregon Department of Human Services Stabilization and Crisis Unit, where he worked for the past five years.

Ethan Rowe said his position with the state led to his successful application to the Sweet Home Police Department, an even bigger long-term goal.

"I want to help protect and serve, make our community whole. As long as I can make a positive impact, I feel like I'm doing myself and Sweet Home Police Department justice."

He credited his wife, who encouraged him to pursue the career, for his successful application.

Rowe said he would like to advance within the department, and his biggest goal is to work as a detective in the future.

After a couple of weeks on the job, "It's still super exciting," Rowe said. "I still feel like I'm doing the part I originally wanted. I'm working with people to solve problems."