Police chief vows to get help out to local homeless 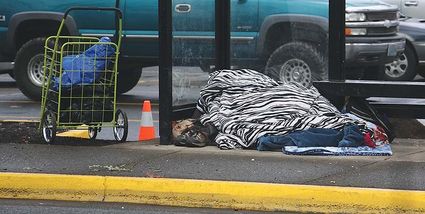 A HOMELESS person sleeps in the bus stop on Kalmia Street, across from the Genealogical Society Library, on Dec. 8.

Police Chief Jeff Lynn told an ad hoc committee on homelessness last week that he wanted move forward with an attempt to bring an adult services team to Sweet Home to begin pushing resources out to the homeless.

Lynn and members of the group, which met Monday, Dec. 10, are planning to attend meetings between the adult services team and homeless persons in Lebanon to get a better idea how the program works.

The adult services team, coordinated through Linn County Mental Health, is a group of representatives of numerous organizations that assist the homeless and those at risk of homelessness.

The ad hoc committee met last month to hear about Lebanon's experiences addressing homelessness. The group decided then to begin exploring options to deal with homelessness in Sweet Home.

In the meantime, Lynn said, "I decided there is no need to wait. We could do exactly what Lebanon's doing in weeks to months."

Or Sweet Home could start moving forward now with resources already in place and go forward with other things, he said.

"Both Albany and Lebanon use what's called the Linn County Adult Services Team. It's already set up."

"No sense to reinvent the wheel," said Bob Dalton, a Sweet Home resident. The challenge is to connect the dots and bring the services to Sweet Home.

The team serves as a kind of clearinghouse for resources, Lynn said. Homeless persons fill out applications, meet with a representatives of the state Department of Human Services and adult services team to receive resources.

It's something "we could roll out sooner rather than later," Lynn said. It's not a "solve-all," but "I think it's just a starting point to get some resources over here. There's no drawback."

The AST invited representatives of Sweet Home to observe meetings with homeless in Lebanon this week, Lynn said.

The program is functionally similar to the Sweet Home School District's youth services team, said Kristi Walker, the district's homeless liaison. Some of the participants are also involved with the county team. Sweet Home's youth team has been functioning since 2010.

City officials will have to go out and engage the homeless, Lynn said, noting that some homeless won't engage the process.

Lynn said he talked to two homeless persons in the couple of days previous to the meeting last week.

One was a mother living in a tent, he said. DHS had just taken her children. The other had been hanging around the area around the Public Library.

Both indicated they would be interested in what resources are available to help them, Lynn said.

Community Services Consortium has a huge list of available services, Lynn said, but Sweet Home doesn't engage many of those.

"Maybe, when we have that connection, we could get more and more over here," he said.

In other business, George Medellin, who is involved with a group of ministers who want to help the homeless, said that Pastor Joe Medley is willing to open the United Methodist Church on 6th Avenue as a warming shelter on freezing nights. The churches need nine people to staff the warming center from 8 p.m. to 8 a.m., and volunteers are needed.

For more information or to get involved contact Lynn at Sweet Home Police Department (541) 367-5181.