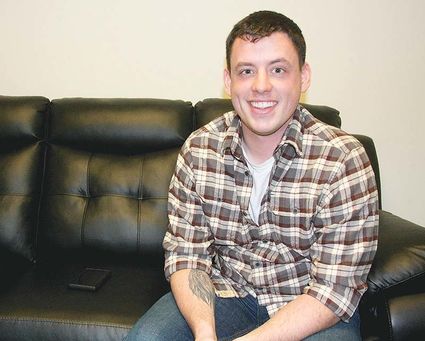 BRET ADAMS says he has been interested in being a Sweet Home police officer for a long time.

Adams is filling a new position authorized in the 2018-19 budget. Ethan Rowe is filling a position left by an officer who did not complete the training program, Lynn said. A third position was vacated in November by Officer Brian Stevens who took a position with the Oregon State Police Albany Area Command. Stevens had been a Sweet Home officer for more than 14 years.

The Police Department is in the background check phase of filling the third position.

Adams, 24, is the son of Mike and Kristin Adams. The 2012 graduate of Sweet Home High School played soccer and spent about two years in the SHPD Explorer program while in high school.

After graduation, "I initially went to Grand Canyon University in Arizona," Adams said. "I spent a year there before moving back."

He finished an associate's degree in general studies at Linn-Benton Community College, taking a lot of criminal justice, business and sociology classes.

After deciding it was time for a break from school, he went to work, mainly in restaurants, while he tried to figure out a career path.

He had planned to return to school, but he had lost scholarship aid when he left Grand Canyon University.

"I made my way to Portland," Adams said. He spent about four years there, and now, "I'm over it."

He worked in restaurants and then for a tile company before going to work for a family-owned car dealership in Forest Grove, where he spent nearly two years in sales.

"I wanted to do police work," Adams said. "I had some people interaction skills I wanted to improve."

He wanted to learn how to better handle situations that made him uncomfortable, he said. He had been hired as a reserve deputy in Washington County, but he could see areas he wanted to improve.

That's why he chose to go to work at a car dealership, he said. "I was there till I saw these guys were hiring. This was the perfect opportunity to not only get back to my hometown but also a good starting point for my career."

As long as it works out for him and the department, Adams intends to spend his time in Sweet Home, he said.

He is happy to be out of the Portland area with its traffic, he said. "Just driving to Corvallis is so much quicker than it used to be."

Though he wanted to get out of town after graduation and experience something else, Adams said he's happy to return to Sweet Home, he said. "I think it was primarily for the familiarity. We have a lot of roots here."

His parents still live here, and two brothers are student teaching and coaching, one of them in Sweet Home. It's also a lot more "Oregonian" than Portland, he said, with all of the transplants moving into the city.

Adams has spent the past couple of weeks in orientation and initial training. He began training on the road this week.

Long-term, he would like to move through the ranks into a supervisory position, he said. He is looking forward to working in a small agency where the supervisors still take active roles as police officers.

"I like the interaction with people," he said. "I like being a support or playing a support role in people's lives, helping people out on the worst day of their lives."