Oregon Congressional delegates weigh in on fixes they'd like to see for U.S. 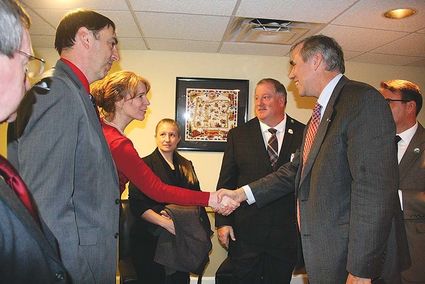 COUNCILWOMAN Susan Coleman shakes hands with Sen. Jeff Merkley in his Capitol office. They are flanked, on left, by Matt Coleman and Councilor Dave Trask, with Tiffany Morgan and Mayor Greg Mahler in center and City Manager Ray Towry at right.

In addition to listening to and talking with Sweet Home officials about local issues during the delegation's trip to Washington D.C. at the beginning of December, Sen. Ron Wyden and Rep. Peter DeFazio told The New Era about some of their efforts in the capital, which includes fixing problems in healthcare and fixing the national infrastructure.

DeFazio, who represents the Fourth Congressional District, which includes Sweet Home, said he has been in Washington for 32 years, and for the first time will be chairman of the Tranportation and Infrastructure Committee.

A longtime and vocal advoca...