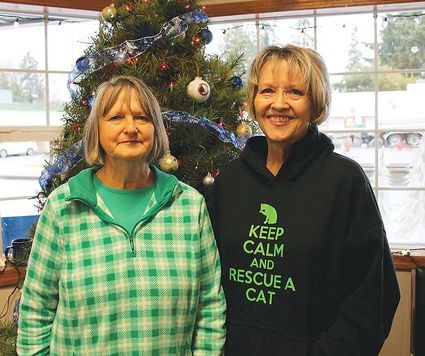 DORIS GARRON, left, and Vicki Lindley are founders and leaders of the KATA team.

For some, retirement is a period of life to rest, catch up on projects around the house, and travel.

But two Sweet Home residents might be working harder than they ever have, and not for pay.

Doris Garron and Vicki Lindley, founders of a nonprofit called Kitty Angel Team Adoption, receive calls for help all day, every day, to take in unwanted cats, catch strays in perilous predicaments, and trap feral felines for spaying and neutering.

The two have been working together since the late 1990s to reduce cat overpopulation in Sweet Home, and rely on a network of volunteers in Linn County to foster the hundreds of cats they rescue each year. As more residents learn about KATA, more calls funnel in for help, and the process bottlenecks.

"We get them in by the dozens, but we only adopt them out one at a time," Lindley explained.

Though they're both from Sweet Home, Garron and Lindley never met until their passion for cat rescue brought them together.

Garron, 73, was raised in Sweet Home since she was about 3 years old, and graduated from Sweet Home High School in 1963. She raised her family and worked at the unemployment office, as well as a couple other odd jobs, and retired from Evanite Fiber in Corvallis in 1990.

Lindley, 67, moved to Sweet Home from Ashland when she was 13 years old, and graduated from Sweet Home High School in 1969. At 28, she began work as a rural postal delivery person, and continued in that position until her retirement 34 years later.

Being out and about as a postal worker, she started seeing a lot of cats in need, and began taking on the endless task of reducing the unwanted cat population in her own neighborhood by trapping and having them fixed at Feral Cat Coalition in Portland, she said.

Garron stumbled into cat rescue when her mother needed several feral cats to be fixed, and contacted Lindley for help, she said.

From that point on, the process kept evolving, Lindley said. The two continued together to fix feral cats, but soon realized there was more to it than that.

"We went all over the state with cats from Lebanon and Sweet Home, but inevitably when you're trapping a cat, you're going to find kittens and you can't just leave them behind," she said.

One day, the pair were catching feral kittens at Lakeside Deli – Glen's Market at the time. There were a lot of them, but Lindley fondly recalled how well Garron handled it.

"She had her shirt open, and she was picking them up and said, 'It's just like picking up Easter eggs.'"

Of the thousands of cats they've rescued over the years, it's among one of Lindley's favorite memories, but not all rescue missions are as sweet.

They find cats in storm drains and culverts, blackberry bushes and dumpsters, homeless encampments and areas where cats possibly were dumped.

"I rescued a kitten that had been dumped on the dam and was wedged way down under the boulders," Lindley said.

As with most catch-and-trap situations, it took lots of patience to get hold of the kitten, whom she named Rocky, but through KATA he was fully vetted and eventually adopted out, she said.

When a cat is brought into the fold at KATA, it is fixed, microchipped, tested for disease, and treated for worms and fleas. Many also require special medical attention.

Their original focus in the late '90s was trap, neuter, release (TNR) for ferals, and any adoptable cats they took in were adopted out from their garages, Lindley said

"We tried to keep them, and then realized we can't keep all these kitties," she said.

The cost to house and transport the cats was also adding up.

"Frankly, we paid out of our pockets when we first started," Lindley said. "We would have a few donations, and then the adoption fees helped a little bit."

But they realized their project was getting bigger than them, and they had register their operation as a 501c(3) organization to keep it going, she said.

Now a majority of their funding comes through donations and adoption fees, but they continue to put personal cash into the system to cover the cost of cat food and litter, Garron added.

"If it wasn't for the Lord, we wouldn't still be going," Lindley said. "Money comes in when we need it, and I just trust." 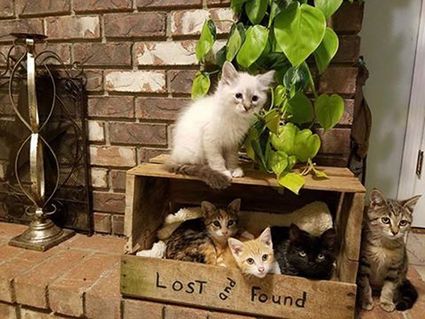 A BASKET of adoptable cats pose in a homemade bin. KATA adopts out several hundred cats a year, and fixes almost twice as many in an effort to reduce cat overpopulation.

While Garron and Lindley continue to TNR feral cats, their main focus has switched to cats that can be adopted to homes. Last year alone, KATA had more than 700 cats spayed and neutered, and adopted 500 to homes in Linn County.

However, they are currently in the middle of two housing crisis situations that require them to find homes to place a few dozen or so barn cats, Garron stressed. It's a job that never seems to end.

"Every once in awhile I've said, 'I quit. I'm done. I can't do anymore.' But what do you do with all those cats?" Garron said.

Lindley expects she'll keep doing the work until she can't move anymore, but she never hesitates to explain how they keep going.

– In addition to writing for The New Era, Sarah Brown also volunteers for KATA.