Huskies get mass of matches at Northwest Duals; varsity 6th 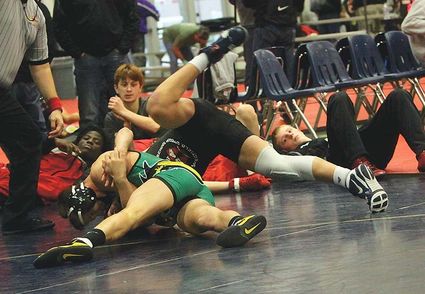 ROBBIE YUNKE takes Thurston's Brett Hieter to his back in a 145-pound bout at the Northwest Duals Saturday.

Sweet Home placed sixth – and 16th – out of 36 teams last weekend at the Northwest Duals tournament held at the Linn County Expo Center in Albany.

The Dec. 28-29 tournament featured some of the top 6A, 5A and 4A schools in the northern part of the state and a few from Washington.

A somewhat depleted varsity squad finished sixth after a 40-27 loss to Tillamook Saturday, and the junior varsity squad was 16th after making the championship round.

"That's pretty impressive," Coach Steve Thorpe said of the second team's achievement. "We saw some great performances from the kids."