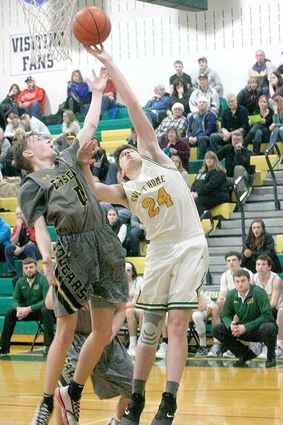 HUNTER COULTER battles for a rebound with Cascade's Drake Davis during the Huskies' win Friday night.

"We needed that one," said Coach Drew Emmert. "I thought we played well, played hard and got a lead early."

The Huskies lost their first three league games to Woodburn, Stayton and, in overtime to Philomath. Along with Sweet Home, all are in the top 10 in statewide rankings. Emmert said his players should have gotten that win against Philomath.