Real snow on the way? 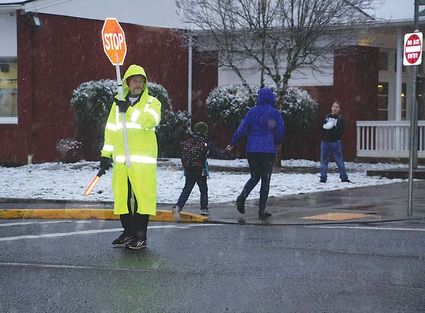 Oak Heights teacher John Mithen serves as crossing guard at the corner of Elm Street and 5th Avenue Monday morning, Feb. 4, as snow flurries fall, dusting the lawn and nearby parked cars – to the delight of kids who managed to scoop up enough to create some snowballs on their way to school. Local schools proceeded on regular schedules Monday, but the white stuff may have been a precursor to what's coming as forecasters say the Sweet Home area could be in for some winter chill this week – and maybe some more substantial snowfall this weekend. As The New Era went to press early Tuesday morning, about an inch of snow had fallen within the city limits and schools Supt. Tom Yahraes announced he had decided to move from a two-hour delay to full school closures due to "icy, slushy roads that are just not improving."